The Berlin in Netflix’s Unorthodox is a multicultural utopia – if only this were the reality. The show’s celebratory depiction of Berlin as a haven for asylum seekers turns the series into uncritical EU propaganda. It is crucial to challenge the series’ two most tantalising myths; that Berlin has entirely reformed from its violent 20th- century nationalism and that the city embraces its many migrants and asylum seekers.

Unorthodox follows the journey of Esty Shapiro as she escapes from the ultra-Orthodox Jewish Satmar community of Crown Heights, New York. Etsy finds her way to Berlin, where her estranged mother lives after also escaping from the community. Across the engrossing four episodes, we watch as Etsy finds romance within a clique of musical Berliners, reconnects with her mother, and dodges her Satmar husband, who’s come to Germany to track her down. Beneath the tense plot twists, we watch Etsy’s inward journey as she finds the parts of herself denied in New York. While Etsy’s life in New York and her escape is based on the memoir of Deborah Feldman, the scenes in Germany are fictional. The show has garnered accolades, such as for its use of Yiddish, and criticism for its negative representation of the Satmar community.

It was not difficult for Etsy to find belonging in Berlin, and nor for that matter, the other asylum seekers and migrants who she meets. From the lake scene where Etsy wades into the water with the group of hip music students, to the prestigious conservatory which has scholarships for refugees, Berlin oozes an easy and fun-going tolerance which sets up a stark contrast to the fortress-like isolation of Crown Height’s Satmar community.

While watching the laughing faces of (seemingly every) extra in the background and the carnivalesque imagery, I waited for a scene that would give voice to the obvious difficulties faced by minorities in Berlin. Mine and my family’s experiences in the city clamoured in the background. My Jewish grandmother and her parents fled Nazi Berlin in 1939. When my family and I returned to the city, while the conditions are incomparable, our times there were peppered with painful reminders that vestiges of Europe’s violent nationalist and racist ideologies still exist. Our experiences make it easier to see through the two myths which Unorthodox un-critically supports. 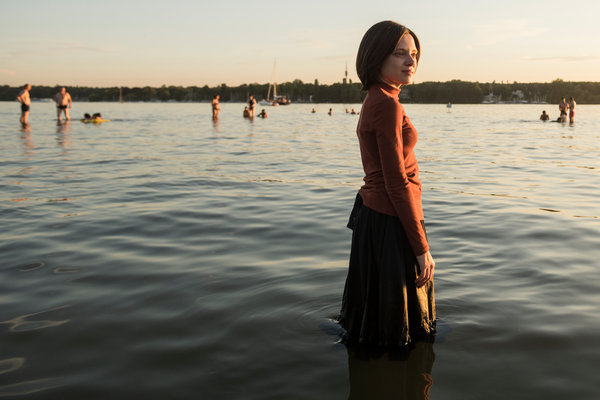 In the series, dwelling on Germany’s past is pointless because apparently, the country has moved on from its former violent ideologies. Get on with your life. This position is crystallised in the series’ lake scene. A few hours before Etsy wades into the waters of Wannsee lake and removes her sheitel (wig), signalling her newly claimed freedom, our protagonist had approached a group of music students on the street in Berlin and boldly asked them if she could accompany them to the lake. As she stands on the shore, Robert (her future lover), points to a villa on the water’s edge and explains how ‘the conference where the Nazis decided to kill the Jews in concentration camps took place in 1942’ there. ‘And you swim in this lake?’ Etsy asks, visibly disturbed. Robert shrugs, ‘Well, the lake is just a lake’. As Robert dives into the crystalline waters, Etsy turns to see a stranger lifting his smiling baby up. ‘Deutschland’ is ominously blazoned in ink across his toned back. This image, the only hint towards any existence of the far-right in Germany, is quickly drowned out in the waters of the lake which Etsy wades into a few moments after. Robert’s attitude to the past is set up as the correct one by the other references to memory scattered through the show. The ‘now it’s just a lake’ position constantly wins, as the main characters demonstrate that dwelling on the past is needless.

Robert, amongst other characters, represents the attitude that Germany, through educational and commemorative efforts, has cut ties with the dominant political ideologies of the 20th century. This attitude reflects broader conceptions, within and outside Germany, that through museums, educational efforts, and reparations, many European nations have been able to reform from their fascistic nationalist pasts. Like Austria, since the 1960s, the German government made many laudable efforts to build a social memory around the Holocaust that accounted for the genocidal violence. Jews were granted reparations through the right of return laws, monuments, and museums to educate Germans about the horrors of the Holocaust and the state’s (still ongoing) persecution of War criminals hammers in the notion that justice lay after 1945.

Yet the past is messy in Germany, as it is anywhere. There is no unified understanding of recent history or how the present is informed by 20th-century events. Neo-Nazis have sprouted up across Germany since the 1950s, many commemorating Hitler through salutes and genocidal slogans. Within the German parliament, far-right parties such as the ADF bear more complex relations to the past, with one of its founders, Björn Höcke, critically calling the Holocaust memorial ‘a monument of shame’. Ideologies which informed Nazi Germany, from ethnic nationalism to Aerian genetic supremacy, will find their way in different forms in groups today and may find new victims, such as asylum seekers from across the Middle East.

Seen through this less rose-tinted lens, Etsy’s surprise when Robert coolly stated, ‘it’s just a lake’ is not the incorrect position. Lakes, squares and buildings which bore witness to key moments of past political regimes will be reclaimed and interpreted ceaselessly by different groups. To carry with you a weariness of the past can be a form of self-protection. In October of 2020, it was hard not to feel vulnerable when my family and I walked into Tiergarten park in Berlin and realised that we had entered an anti-Covid protest which led to the storming of the Reichstag and included 3,000 members of the far-right. It was surreal to be surrounded by the flags of the pre-1918 German Empire that are often associated with Neo-Nazism. A few years before, my brother was struck in the back of the head in Görlitzer Park in 2015. He had been running through it, and his star of David came out. To stroll around Germany with a sense that the past is over and the nation is a haven of liberal tolerance would make us oblivious to the growth of far-right extremism in the country and the historically loaded spaces where violence may rear its head.

Sometimes feeling haunted by the ghosts of the past is a form of protection in the present. It is not something to be belittled, as often happened in the series. Europe, and its many nations, have not simply ‘moved on’ from the past, and to state so encourages an attitude of complacency which sees the work of social reformation as over. 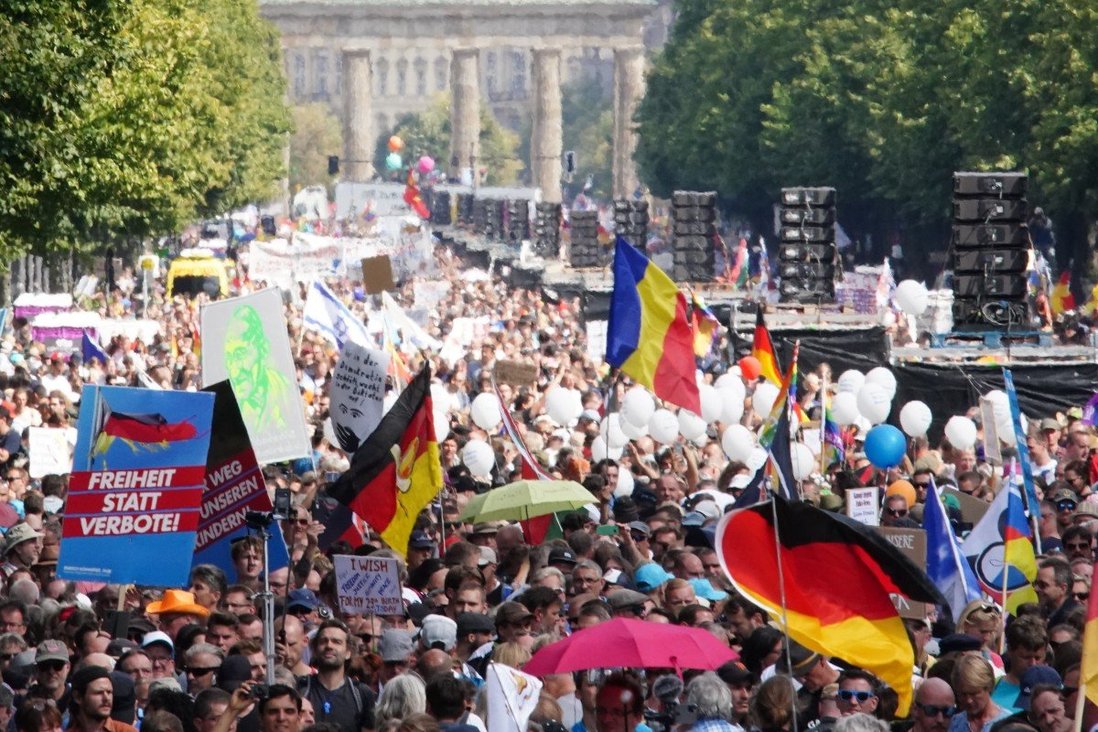 The second myth within Unorthodox is its celebration of Berlin as a haven for its many asylum seekers, refugees and migrants. The series becomes more than a story about Etsy finding herself within Berlin through telling the tale of multiple minorities finding acceptance in Germany. Within Etsy’s small gaggle of friends, Ahmed had moved from Nigeria, Yael has migrated from Israel and Dasia is of Yemeni heritage. Etsy’s mother kisses her girlfriend on the street, relaxed and un-self-conscious. Ahmed suggests that he came to Berlin’s music school because ‘imagine being a gay kid in Nigeria’. Etsy’s own acceptance is rapid. The things she felt shame for in the Satmar community become instantly cool in Berlin, from her shaved head to her singing loudly in Yiddish in her conservatory audition. A binary is set up in the show: there is bad, here is good. The ‘there’ is often associated with non-Western countries or minority religious groups, while the ‘here’ is associated with a progressive, European culture of multicultural acceptance. 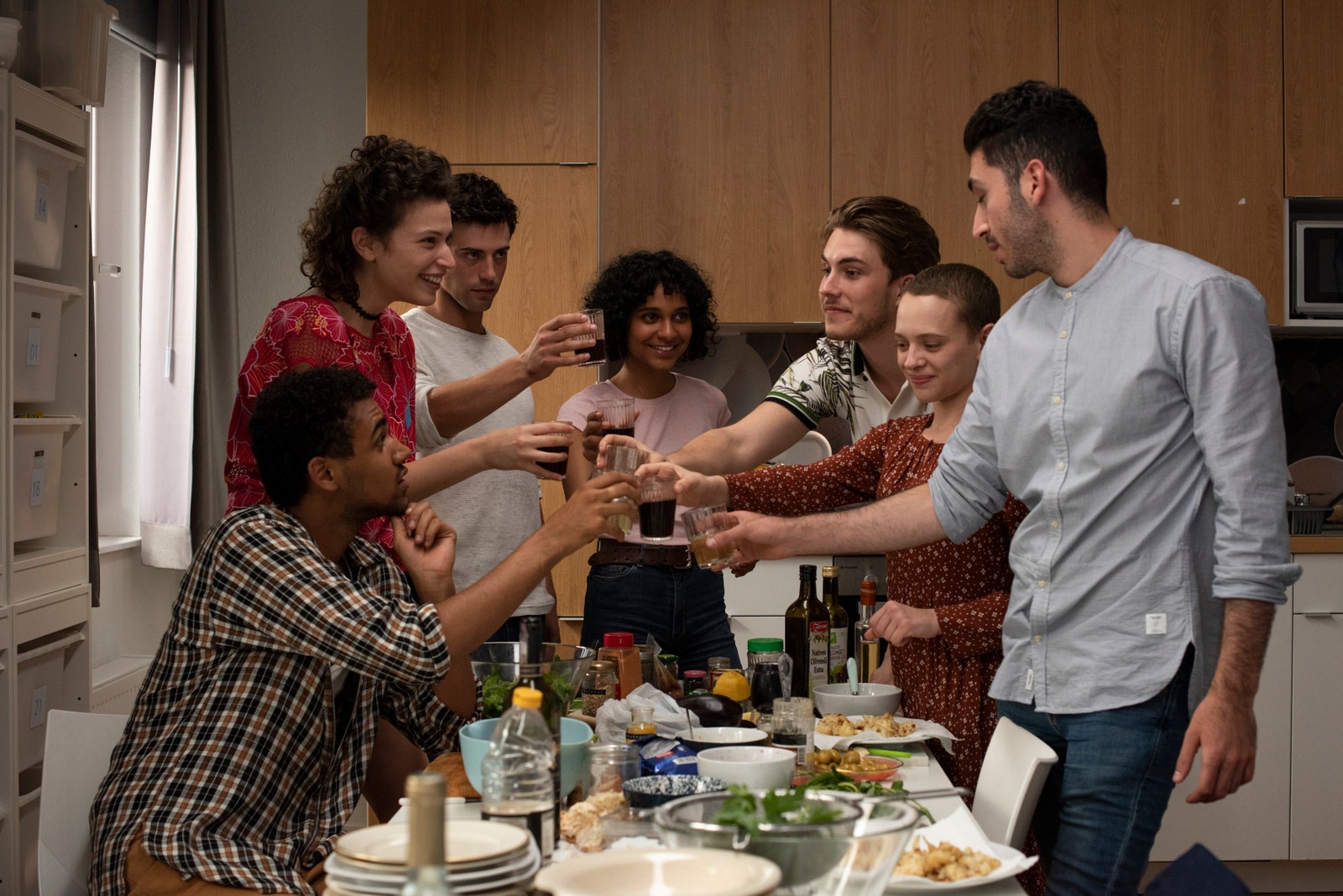 This positive representation of Berlin draws from a range of popularly held narratives about Germany and Europe. Germany is often celebrated for its efforts of reformation following 20th century Nazism, with its status as having accepted the most migrants in the refugee crisis of 2015 further evidence that the nation accommodates ethnic and religious diversity. Yet a more European-wide idea weaves itself through the series. White Europeans have historically defined Europe in civilisational terms, deemed as more progressive and liberal than supposedly less “enlightened” nations. Since the 15th century, this imagined superiority has justified grotesque violence against supposed ‘backwards’, non-white or non-Christian groups through imperialism and colonialism. Today, an un-questioning sense of Euro-American progressiveness, tolerance, and in many cases, racial superiority, still exists in multiple forms that bear both similarities and differences to pre-21st century ideas. It is no surprise that it took so long before contemporary acts of white supremacist violence were perceived as ‘terrorism’ in Europe. Terrorism was something that happened over there, not here.

There is much to celebrate about Germany, and especially Berlin. The active and long-established LGBTQI+ communities in the city makes it a far safer place for many to be openly queer or transgender. However, discrimination against non-white asylum seekers, migrants, and LGBTQI+ persons is an ongoing problem. Germany’s most prominent far-right political group, Alternative for Germany (AfD), helped whip up widespread xenophobic and Islamophobic sentiments with a 2017 pre-election advert featuring bikini-clad women and the statement ‘Burkas? We prefer Bikinis’. In 2020, 632 Islamophobic crimes were recorded to the police, including mosque vandalism, harassment of women in headscarves and verbal attacks. And that figure doesn’t account for all the crimes left unreported. Violence frequently affects the LGBTQI+ community, with a 36% rise in hate crimes recorded in 2020. Last October, my sister and her girlfriend were harassed in a restaurant in the far-right frequented area of lake Wandlitz. They didn’t know beforehand this was an unsafe area for those openly queer – it was not ‘just a lake’.

Belonging does not fall in your lap in Berlin, as suggested by Unorthodox. While the series presents Berlin as a blank slate that invites you to express your true self freely, spoken and unspoken rules exist for those who do not fall within the white German majority, while individuals will be judged based on their skin tone or signalled religious affiliation. Jews have felt pressured to assimilate to dominant German culture since they were granted citizenship in the 19th century. Such pressures to acculturate still exist for the many ethnoreligious minorities who have sought new lives in Germany.

Unorthodox is undoubtedly powerful, and Debbie Feldman’s story needs to be told. Etsy flees from an oppressive community and seeks greater acceptance in Berlin, as many others have done, and this is an important story to represent. Yet in only representing the positives of Berlin, the series becomes a fanciful EU propaganda that will only help divert much needed attention to tackling the ingrained issues of white supremacy, exclusionary nationalism and economic disparity that have plagued the continent for centuries. Beyond Berlin’s streets, Etsy would feel haunted by the past anywhere in Europe. We have not left it behind, and to suggest we have, is a counterproductive distortion of the present day to the millions of viewers who streamed the show.

Flora Hastings is a Ph.D. candidate in the anthropology department of SOAS, University of London. Her research explores the (re-)appropriation of public space and heritage zones by groups and individuals in Barcelona, with a focus on huertos urbanos (public gardens).