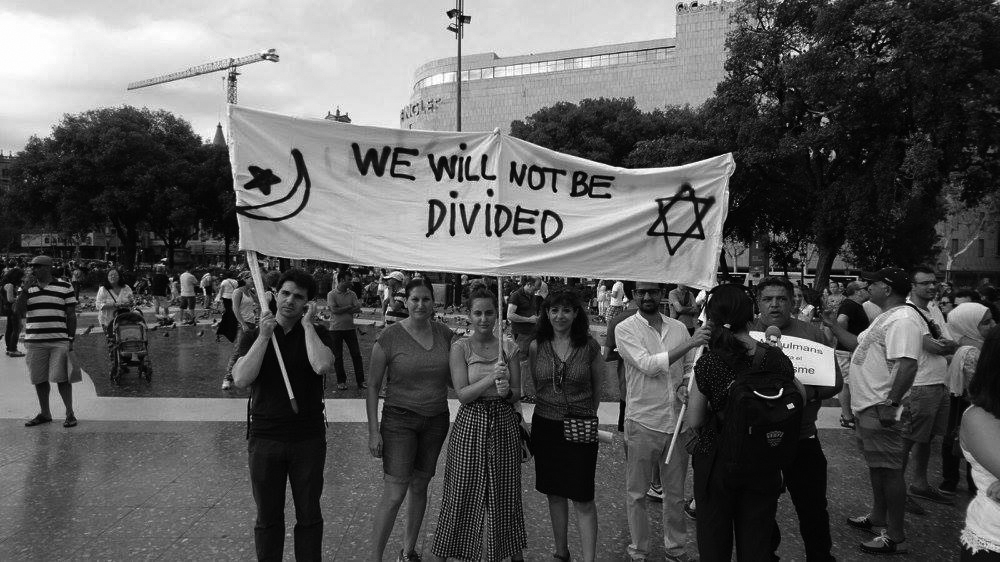 At one my first meetings with the group Salam Shalom Barcelona (see description at end of entry), one of the organizers asked us to get into groups with about two Jewish members and two Muslims members and a member from another religion. Well, we all sat fidgeting in our chairs, until someone finally said that we didn’t know who was Muslim and who was Jewish. Out of the twenty or so in attendance, there were two women wearing hijabs (head coverings) and two men wearing kippot (yarmulkes, skullcaps). Otherwise, there was no way to really tell who was Muslim or Jewish.

Last night in Barcelona, dozens of Muslim groups came together to host an event, “Muslims Against Terrorism,” to show solidarity after last Thursday’s horrific attack. Muslims have been facing harsh criticism for their lack of response in the wake of the tragedy – although this criticism is completely false – they had denounced the assault immediately and continue to do so. The event was open to anyone who wanted to join in. The principal messages being: “We are not afraid;” “We do not hate;” and “We are Barcelona.”

Women’s March Barcelona and Salam Shalom Barcelona were just two of the hundreds of groups standing in support with their Muslim brothers and sisters. In addition to the other messages, as people marched from Plaza Catalunya down Las Ramblas, you could hear people chanting “Not in my name;” “I’m a Muslim, not a terrorist;” “I am Barcelona;” and “We are Barcelona.” 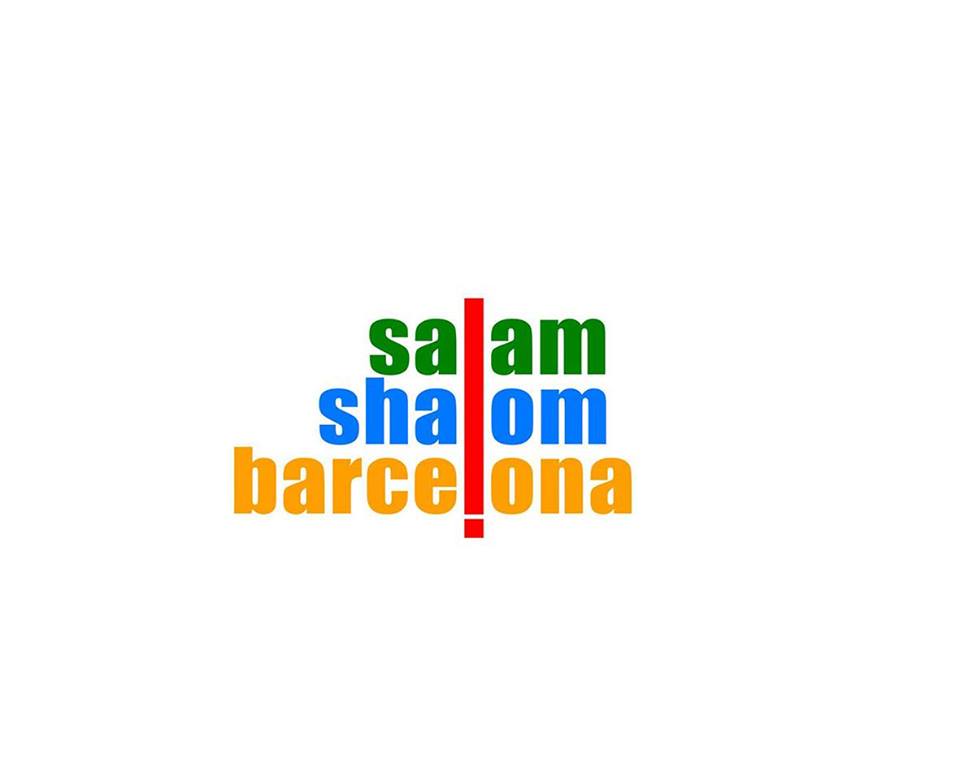 On the way to the event, my taxi driver spent the whole time questioning why he hadn’t seen any men among the photos and videos of Muslims protesting the terrorist act. First of all I wondered, who is he to criticize how people respond to a terrorist attack; and second, why does this man deserve an explanation at all. Then, I did my best to lay out the situation as I understand it. I asked the driver how he even knew that he hasn’t seen photos of Muslim men at the protests and gatherings. I explained that not all Muslims dress in the traditional clothing that people may assume they must all wear. Most of the Muslim men I saw last night, and often at other gatherings, wear modern clothes – like buttoned down collared shirts and trousers. Oftentimes they can easily be mistaken for Israelis, they look so much alike. When I reached the Salam Shalom group last night, I recognized one of the women and two of the men, but I honestly couldn’t remember which were Jewish or Muslim. So no, Mr. Taxi Driver, and all the other critics out there, it’s not as simple as just judging a book by its cover – but I thought we were supposed to have covered that lesson back in elementary school. While it’s an elementary lesson, it’s clearly one that must be revisited over and over and over.

While there were some men in traditional garb and women wearing hijabs last night, it was often only clear who was Muslim because of the sign they were carrying – it said in Spanish or Catalan, “I am Muslim. I am not a terrorist.” But again, anyone could have carried one of those as a sign of solidarity.

Soy musulman y no soy terrorista – I’m a muslim and I’m not a terrorist.

If I would ever feel the need to carry a sign that read “I am Jewish. I am not a terrorist,” I am sure I would react as the mother and daughter did, standing right next to me, silently crying their hearts out while wiping away tears. If an attack were to happen, caused by about 15 people who did so in the name of my religion, and I then had to face constant questions and criticism, answer calls and have television cameras in my face, all demanding answers on behalf of my entire religion, I might just decide to stay home, cower in a corner, and feel completely helpless and overwhelmed by the situation. But these brave men, women and children, who happen to be Muslim, took to the streets and defended their right to be who they are and to remind people that those terrorists do not represent them.

The taxi driver went on to say that these people can dress however they want in their country – and I asked, and if they are from here? He stammered something of a response that I didn’t quite hear. The first speaker last night spoke quickly and perfectly in Catalan. The next speaker the same, but in Spanish. This is their home. Some young Muslim men who I met last night have lived here for 19 and 16 years respectively, being younger than I am, that is more than their entire adult lives. 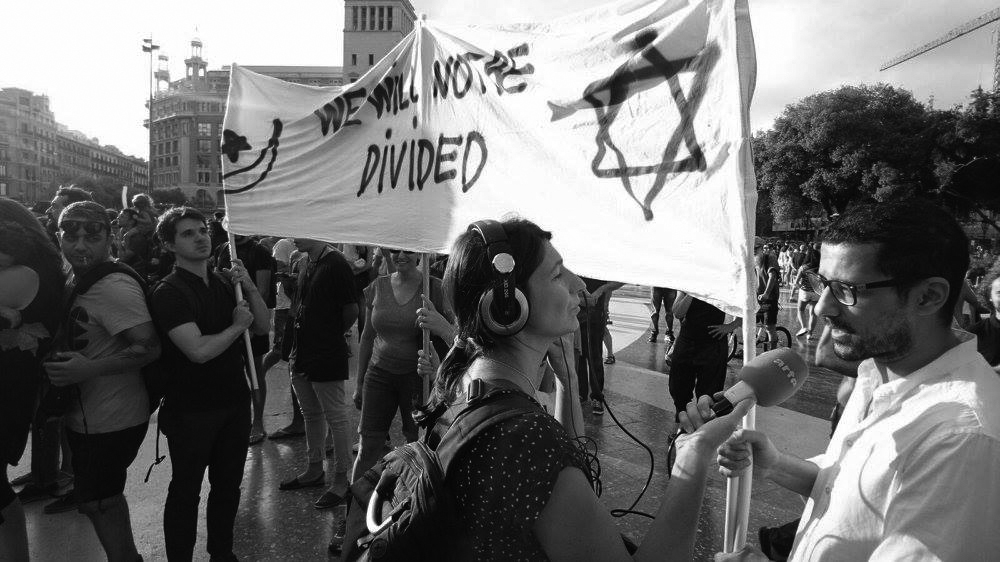 So what is it – why do I feel that it is only right to stand up for other minorities, including Muslims? I lend whatever bit of support I can to the Muslim community because I can only too easily identify with them. Not so long ago, and still often today, it was and is Jews who continue to be the scapegoats for everything that bad and wrong in society. You still see white supremacists spewing hateful rhetoric and fear that Jews will take over. 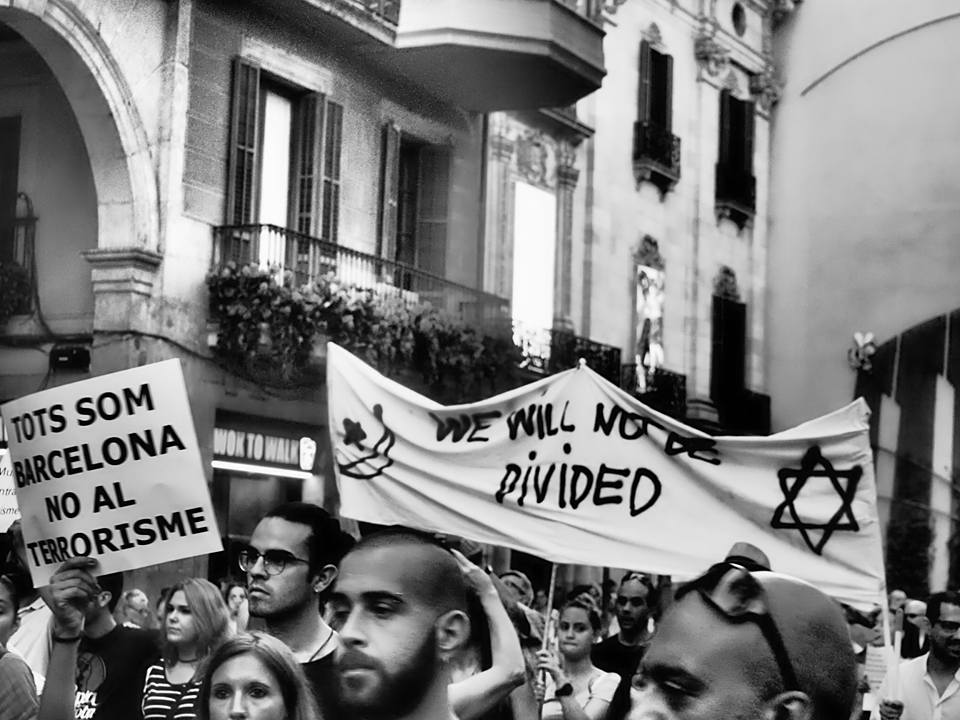 SALAM SHALOM BARCELONA exists to face the problems of anti-Semitism, Islamophobia, and racial and religious discrimination in general and to build solidarity, inclusiveness and openness between Islam and Judaism. We believe deeply in intercultural dialogue and in a peaceful and constructive coexistence.

One thought on “We Will Not Be Divided”