This coming year the Catalan Jewish community will celebrate its Centenary in our country. This anniversary refers to the creation, in the years 1917-1918, of a specific organisational structure (community) that served as a social, educational, cultural and religious meeting point of the Catalan Jewish population. Numerically, it represents a very small percentage of the Catalonian population, but deserves further consideration. To this end, we must cross many centuries, to ancient times, when the great Diaspora of the Roman times found Jewish populations settling across Mediterranean lands. Not only did medieval Jews assimilate Catalan language and culture, they also played a key role. 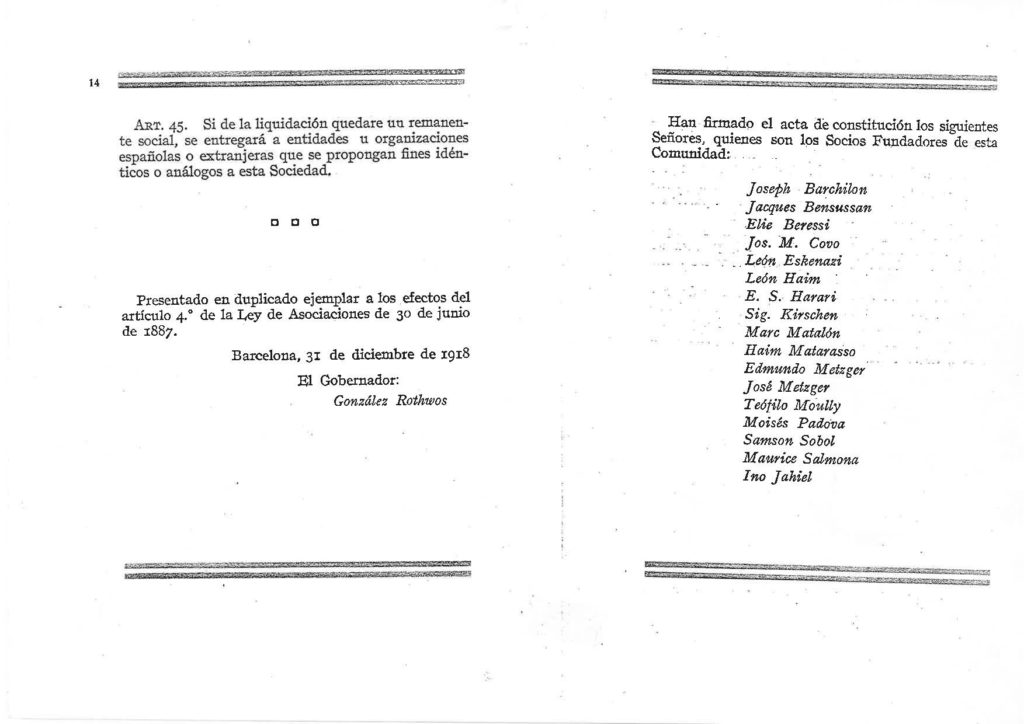 We can highlight the crucial role played by Catalan Jews in the expansion in the Mediterranean: the financial activity carried out offered sufficient liquidity for the viability of the economic system, their international connections served the monarchy in administrative and diplomatic tasks, their role as advisors in the courts. They helped forge the Catalan personality. Medieval Catalan Jews and Christians not only shared a space but also a language, a taste for business affairs, a characteristic form of government. Affinities that were not strong enough to prevent the tragedy suffered by the Jews and their expulsion in 1492.

In exile, emigration of Peninsula Jews varied in destination and timing, but overall the trend was to flee across the Mediterranean to places made enticing by rulers, whether Popes, Dukes, Sultans, Princes, through favourable legislation. During the following centuries, the exiled Catalan Jewish community gradually lost the memory of its past and its Catalan characteristics, a result of being absorbed with the majority of the Castillian Jewry with whom they shared settlement. In this sense it is interesting to note that the use of the name “Sepharad” and the denomym “Sephardic”, was introduced to modern European languages from Hebrew. This designation is used today to indicate specific liturgical and cultural characteristics common to Mediterranean Judaism. Sepharad became also the usual designation for all lands of the Iberian Peninsula, without distinction between the origin of the Christian or Arabic kingdoms. Catalonia, however, was not included (as Sephardic) until the late sixteenth century. Perhaps most remarkable consideration, is offered through the language that was crucial in the creation of a certain mythology: beautiful, nostalgic, accredited, but with historical connotations to be questioned. That Catalan Jews lost their identity, does not mean they spoke Spanish in the Thirteenth century.

The parentheses of Jewish presence in Catalonia would run for four centuries. During this period, Judaism continually evolved. The mid-seventeenth century saw entry to a new paradigm, characterised by the philosophical-scientific revolution that would radically transform European society and with it, Judaism. The streams of Judaism as we understand them today (Orthodox, Reform, Conservative and Secular) emerged from this period, and relate to the position of the Jewish leadership regarding the conflicts between tradition and innovation, biblical-Talmudic conception of God and Copernican worldview

While we might think that during the nineteenth century, the century of political freedom and religious tolerance, the Jews would have seen the chance to return to the mainland. However, the weakness of the Spanish liberal system and the persistence of nostalgic reactionary forces of the old regime, dissuaded them. It is estimated that in 1887, roughly twenty Jewish families lived in Barcelona, mainly businessmen, originating from France and Central Europe. At that time, the Jewish question was a hot topic that raised passions and political crises in France, the Austro-Hungarian Empire, Germany or Russia.

World War I brought change to this situation, drawing families from over Europe to Catalonia. The industrial and commercial weight of the Catalan capital attracted Jews from Thessaloniki, interested to make connections with Greece to supply the Franco-British expeditionary force in the Balkans. Ottoman Jews saw Barcelona ​​as a manufacturing and port city, giving refuge from the war, even dynamism and prosperity. Influx of other arrivals fleeing military service, Central eEuropean dynasties and persecution, around one thousand people, added to the collective. This growing population provided the seed for the creation of an organisation capable to serve Jewish needs for worship, education and charity. Thus, in 1917, the Comunidad Israelita de Barcelona was born. While they were mostly Turks among the signatories statutes, the first president was a German Ashkenazi, Edmundo Metzger. The choice of “Israelita” name, and not the traditional “Judía”, reflects the prevention of using a word with a negative weight that prevailed in the collective imagination as a deicide community.

The arrival of the Second Republic, the new scenario of freedom, and the secular state undoubtedly improved the social conditions of the life of the Catalan Jews. This fact must be added alongside of Hitler’s arrival to power, triggering forced migration of hundreds of endangered Jews. In 1936 it is estimated that in Barcelona resided over five thousand Jews, more than half of them Poles and Germans. The high degree of politicisation of the new immigrants caused a deep enrichment of Jewish life. A notable example is the creation of the “Judischer Kulturbund”, which was related to Catalan orthodox communism, which had a leading role in the preparation of the Popular Olympiad in 1936. The military uprising provoked many Jews to return to their home countries, although some members of the Judischer Kulturbund remained, adding to volunteers from around the world, embraced the republican cause by joining the anti-fascist militias. They even formed a Jewish company- the Naftali Botwin Company. In the Fossar de la Pedrera of Montjuic, a monument in the form of a Star of David pays tribute to the fallen of that contingent of about seven thousand volunteers.

The victory of the Franco army and the outbreak of World War II turned Catalonia in a precarious refuge from Nazi barbarism. The cult was banned and the President of the Community, Edmundo Grunebaum, was imprisoned. The rest of the organisation went underground and their tasks were limited to help the exiled compatriots. The Franco regime’s policy on foreigners entering Spanish territory was mostly improvised, as far as Jews were concerned. It changed over the years, as a result of shifts in the course of the war and the origins of those fleeing. In spite of this lack of clarity, the humanitarian action of certain Spanish diplomats sent to Central European embassies should be noted. The prohibition of legal entry into Spain resulted in those individuals wishing to flee from war-torn Europe forced people to secretly cross the Pyrenees. Allied embassies and consulates played a key role in forcing the Franco regime to ease its policy towards refugees. 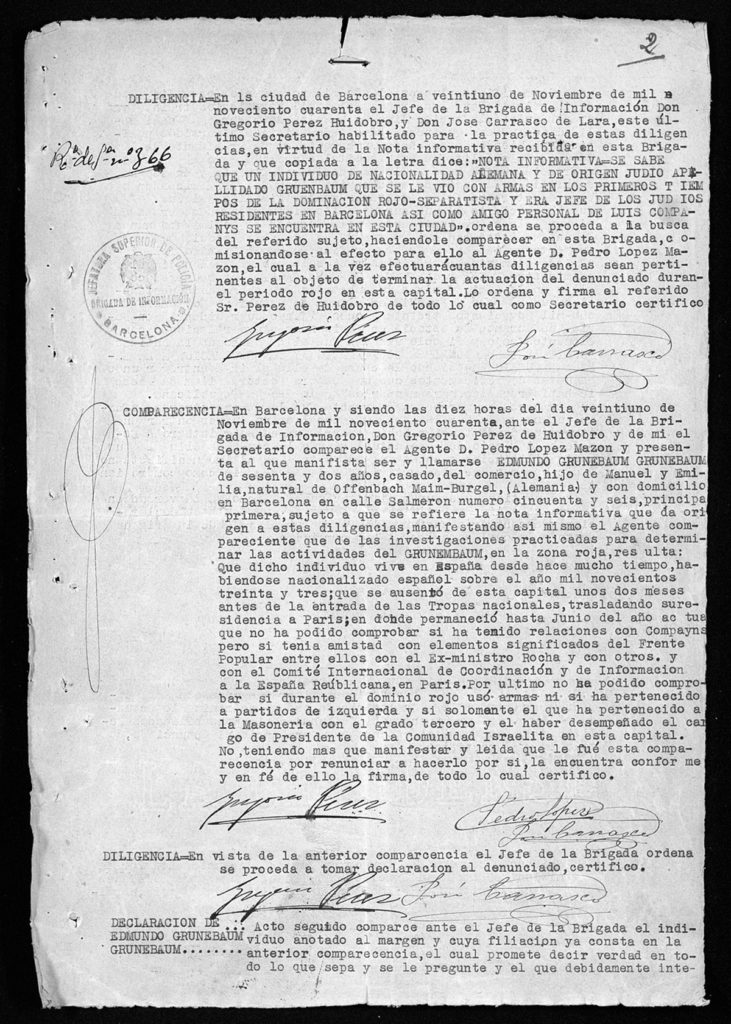 In the context of the Franco’s cosmetic changes in the fifties, there was a construction of a Philo-Sephardi myth that consisted of timid measures for the return of Sephardi Jews to Spanish territory, though, enticing claims that Franco helped save the Jews are simply gestures of pure propaganda. These policies were only applied towards Western powers when the regime was suffering intense international isolation. This situation was used by the Jewish community to found, in 1954, the first synagogue on the peninsula after the expulsion of 1492, relying on the new “Fuero de los Españoles” and the influence from abroad. This historic landmark, with the erosion of the regime and the slow recovery of freedom, made Catalonia again a host ground country for political exiles. There have been several migrations that have nourished the Jewish community since that time, such as, the Jews of North Africa in the sixties, or Jewish exiles from Latin American military regimes in the seventies.

Since 1977 the Jewish collective is located in a fully democratic framework with a broad religious freedom. This allowed the creation of associative channels for exchange and mutual recognition between the Jewish community and the rest of Catalan society, a result of the process of institutional and cultural complexity adapting to the characteristics of a changing Jewish population. This heterogeneity has now expanded to four different communities and to multiple non community associations and entities, which are forming a diverse Jewish framework which responds to increases in the diversity of the Catalan Jewish communities, to the many expressions of their identities, and to the many forms of approaching and living Judaism.

At a time when Catalonia intensifies its work to restore historical heritage, it’s appropriate to recover the memory that has historically contributed to the structure of our country. In this regard, scholars of our history and culture should contribute. However, currently, those who will normalise the recognition of a Catalan Judaism status are the members of the Catalan Jewish communities. To deal with the challenges of integrating such a specific title into the wider community, perhaps one must look into its acceptance in the past. Especially marked by the use of language, Catalonia has lived among this Jewish identity, a recognition dating back to the middle ages.

2 thoughts on “The (re)construction of the Catalan Jewish community”