Who is Menachem Meiri? Until a few generations ago, many erudite rabbis would have been at a loss to answer. Indeed, if the Meiri (1249-1315) was an influential commentator and decision-maker in 13th-century Catalonia, it seems that his writings fell somewhat out of fashion – and later out of print – for many centuries before reappearing sometime around the beginning of the 20th century.

Because of his innovative and inclusive rulings, the Meiri has recently received a significant amount of attention from modern scholars and activists thrilled to find a medieval rabbinic source to support universalistic values.

Indeed, the Meiri’s claim to fame is to have attempted to distinguish between the Ovdei Kochavim (lit. “star worshipers”) of the Talmud and his contemporary gentile neighbours, whose practices and belief systems had little in common with those of the idolaters whose contact with Jews the early rabbis curtailed. The Meiri held that a great number of restrictions and prohibitions that one should maintain vis-à-vis idolaters did not apply to Christians.

To understand the Meiri, one needs to grasp the broader intellectual context in which such a figure emerged. Provençal Jewry stood at a cultural crossroad in medieval times, both in contact with Sefarad, and its constant dialogue with philosophy brought by Islamic scholars, and Ashkenaz, with its prolific and methodical production of Talmudic commentaries. 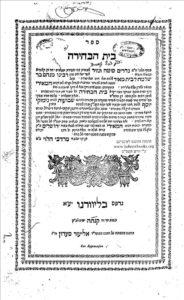 The front page of the 1795 Livorno edition of the Meiri’s most famous work, the Beit HaBechirah.

Indeed, the Meiri’s most famous work, the Beit HaBechirah (“the Chosen House”), reads as a running commentary on the Talmud, but it is fact infused with the author’s inner conversation with the scholar he admired most: the Rambam, or Maimonides.

Let us examine the Meiri’s approach by analyzing his commentary on a mishnah that appears in the second chapter of the tractate Avodah Zarah, relating to “foreign worship.”

The mishnah reads as follows:

One may not leave his animals in custody of gentiles, because they are suspected of bestiality.

The Meiri comments on this disturbing source in the following fashion:

I have seen many people puzzled by the fact that nowadays nobody is careful to observe these laws. But I have already explained  which gentile nations are meant in this tractate, and the names of their holidays will also testify to it: for, as I mentioned above, they all are feasts of ancient nations, not restricted by the ways of religions, but practicing fervently and persistently the worship of idols, stars and talismans, which—and all things like them—are essentials of idolatry […]  But in any event, with regard to [avoiding] the possibility of violation of the prohibitions concerning the Sabbath and the prohibitions concerning food and drink [of non-Jews]—e.g., [the ban] on wine of libation, and on their wine per se and all those types of bans, whether it is only consuming something [of theirs] in food which was banned, or getting any advantage from it, or if the bans were made in order to prevent intermarriages—all the [non-Jewish] nations come under these prohibitions… From now on, let these things be settled on your mind, so that it will not be necessary to clarify them specifically on each and every occasion, but you should be able to analyze on your own whether in any particular case the ancient nations are meant or the non-Jews in general; examine things, and you will know them. 1

A few things deserved to be commented on. First the fact that the Meiri seems to be speaking from a fait accompli perspective. People are already not paying much attention to certain restrictions pertaining to non-Jews. Depending on the matter at stake, the personality and influence of the rabbi addressed, and how widespread a practice has become, poskim (Jewish legal scholars and decisionmakers) can decide to either call their community to order and remind them of the “correct practice” or, as the Meiri does in this case, rule in a way that incorporates current practice into the scope of halachah.

Secondly, the very idea that the evolution of historical circumstances could impact halachah is worth pointing out too. A position that might anachronistically appear as radical to those familiar with today’s tenets of orthodoxy may not have been at all revolutionary for earlier generations of sages, as this source and many others illustrate. 2

The phrasing used by the Meiri to ground his distinction between the idolaters of old and contemporary gentiles is also worth noting: “But I have already explained which gentile nations are meant in this tractate; and the names of their holidays will also testify to it: for, as I mentioned above, they all are feasts of ancient nations.”

The language he uses is almost like that of an anthropologist or historian, comparing the names of rites and searching for the now long-gone nations that practiced them. Rather than trying to fit the reality he witnesses into the words of the mishnah—for instance, by taking into account that the contemporary gentiles call their religious ceremonies by different names than those used in the days of the mishnah – the Meiri refuses to essentialize non-Jews and confine them to the figure of the “star worshiper.”

Lastly, the open-endedness of his ruling is striking: “but you should be able to analyze on your own whether in any particular case the ancient nations are meant or the non-Jews in general; examine things, and you will know them.”

This might reveal some discomfort from the part of the Meiri regarding the practical implications of a complete redefinition of the status of the non-Jew. Leaving the scope of its application to the individual allows practice to evolve organically without the rabbi himself having to bear all the responsibility of the change.

However, the Meiri’s position should not be caricatured. He had no intention of abolishing the distinction between Jews and gentiles, nor of bolstering assimilation. Hence, he distinguished between the restrictions created to distance Jews from idolatrous practices, and those enacted to preserve Jewish distinctiveness. Since the causes which motivated the former category no longer existed,at least where he lived, these restrictions were no longer necessary,, but the reasoning behind the restrictions of the latter category remained relevant. 3

All of this being said, the Meiri was merely pushing one step further a thought that preceded him.  Rabenu Gershom, for instance, had already ruled a century before that prohibitions on commerce with idolators did not apply to Christians. As Professor Moshe Halbertal notes:

These [previous] halakhists determined that because the local gentiles were not devout, some of the prohibitions on commerce did not apply to them. Nevertheless, they held that even though Christians were not devout in their religion, Christianity itself was idolatrous. 4

The Meiri expanded the road paved by the Rambam, who had introduced a distinction between Muslims and idolaters, and held that the economic prohibitions did not apply to them. However, the Rambam would not go as far as treating them on a equal footing with Jews when it came to penal matters, which the Meiri was willing to do:

Thus, all people who are of the nations that are restricted by the ways of religion and worship the divinity in any way, even if their faith is far from ours, are excluded from this principle [of inequality]. Rather, they are like full-fledged Jews with respect to these matters, even with respect to lost property and returning assets gained through error and all the other matters, with no distinction whatsoever. 5

The novelty of the Meiri’s approach thus resides in his exclusion of Christianity from the definition of idolatry. If gentiles were to be equally compensated in cases of damaged property, or equally saved on the holy Shabbat, it is not because “ruling otherwise would stir hatred,” or because the financial consequences would be too dire for the community, as many had ruled before. Rather, he argued that gentiles were “people restricted by ways of religion,” meaning, bound by a transcendent code of ethics. According to Halbertal:

The distinction between paganism and its negation lies neither in the details of the various religions’ concepts of God’s unity, nor in the difference between polytheism and pure monotheism. Were that the distinction, Christianity would be considered an idolatrous religion. It is because the Me’iri identifies the ancient nations with materialism and fetishism that he can determine with certainty that Christianity is not an idolatrous religion, since it too recognizes a transcendental, non-material cause. The Me’iri then argues that the idolatrous nations, [mentioned in the Talmud] which deny the non-corporeal and lack any concept of God, lack as well any fear of God that forms the basis for “the restrictions of religion.” It is because idolatry generates a society lacking fear of God and lacking law, and such a society is not protected by law. 6

What is the Meiri’s legacy?

To understand the impact, or lack thereof, of the Meiri, one must question the so-called disappearance and reappearance of his writings.

Truth be told, the Beit HaBerichah was not a widespread text throughout most of its existence, and for a reason: it was extremely lengthy, which, before the printing press, meant that copying it in its entirety would have required a great amount of time and funding.

What triggered the “re-discovery” narrative? In the mid-1800s, the Biblioteca Palatina in Parma acquired a collection of about 1500 old Hebrew manuscripts, which had belonged to a deceased priest. Amongst those manuscripts was the entire Beit HaBechirah, which was published in its entirety for the first time in 1920. (An initial, partial publication had been undertaken in Livorno in 1795. 7)

However, saying that it had completely disappeared before its Italian renaissance would be an overstatement.

In fact, we can testify that the Meiri’s writings had made it all the way to Sfat by the 16th century.  Rabbi Betzalel Ashkenazi, author of the Shitah Mekubetzet and teacher of the Ari, Isaac Luria, refers to the Meiri in his commentary on the Bava Kamma Tractate. Nonetheless, the Meiri was lost for some time to at least part of the Jewish world, as the commentary of the Chofetz Chaim attests. The Chofetz Chaim, author of a commentary on the Shulchan Aruch called the Mishnah Berura, interestingly states: “now that we have the Meiri…” 8 Around the same time, the Chazon Ish affirmed that because the Meiri’s writings had only recently been rediscovered, the halachic process had evolved without them, and his views and rulings could not be post facto included in the chain of transmission of halachah.

Later decisions would question the very validity of these texts: Rabbi Joseph B. Soloveitchik (1903-1993), often referred to as the founder of Modern Orthodoxy, was suspicious that a rabbinic text could have been unknown to later rabbis: “If the chachmei hamesorah (the rabbis charged with handing down the tradition) did not see this text, then it’s probably wrong….If the Vilna Gaon and Rav Chaim did not know of the new Meiri, then the new Meiri could only be a curiosity, not a member of the exclusive club that included Rambam, Ramban, and Rabeinu Tam.” 9

What led the Meiri to take such a lenient stance? Was he concerned that his community was already acting in a way that was contrary to the accepted halachah, and felt the need to align the rule with the practice? Did some conversations with Christian theologians led him to reconsider how their religion should be qualified? Did positive personal encounters with Christians have an impact on him? Or do those rulings speak to the context of overall concord between Jews and different Christian groups in Catalonia and Provence during the Meiri’s days?

In any event, the Meiri’s unique use of the concept “restricted by way of religion’ provides us with an instructive example of how ethics-based reasoning can lead to a changed interpretation of earlier halachic sources.