Before the Second World War, more than seven million Jews lived in Central and Eastern Europe. Jewish communities lived in this vast territory of Old Europe for centuries, developing their own culture intensely related to that of their neighbours. Public records and archives tell us about the thousands of cities and towns with Jewish populations, which attests the deep establishment and use of Jewish community spaces, such as cemeteries, synagogues, sports centres and theatres, among many more. More than eighty years later, there are no traces of many of these spaces, the result of the annihilation suffered during the Holocaust, which ended up reducing the tangible and intangible heritage of those European Jews to ashes.

Almost twenty years ago, an initiative was born to combat collective forgetfulness and to dignify the European Jewish heritage, the European Days of Jewish Culture (the EDJC). This year celebrating its 19th edition, the fundamental objective of this European-wide event is to highlight the diversity and richness of Judaism, with the firm intention of promoting dialogue, recognition and exchange through conferences, concerts, performances, guided tours and other activities, which take place simultaneously throughout the continent.

The EDJC is the reflection of a true revolution in the field of culture, which, for the first time, places citizens, communities and territory at the forefront while using cultural heritage as an agent for sustainable local development. Important aspects of heritage, in terms of human rights and democracy, stand at its centre and align with the values of the Faro Convention, a framework established by the Council of Europe. It is the commitment to these values ​​and the involvement of a vast range of cultural and social agents that have made the EDJC a benchmark of promoting cultural heritage at European level.

The success of the EDJC lies in the active involvement of an increasing number of local participants. Organisations, town halls, public and private entities, professionals and cultural collectives, are coordinated by the AEPJ, who’s annual theme provides inspiration for entering unique crevasses of each region history. Last year, for example, more than 420 cities from 28 European countries, with the participation of more than 179,000 people, took part in the program, making this program an unmissable event in the cultural calendar of September.

The great variety and originality of the EDJC program constitutes as one of the main attractions of the initiative. Through guided tours, lectures and exhibitions, demonstrations, culinary tastings, dramatizations, concerts, round tables and workshops, the EDJC program provides citizens a broad cultural dissemination during the first week of September. This series of participants; collectives, Jewish communities, museums, public institutions, are invited provide their own vision and realisation of an annual theme, from the scope of their community, bringing new approaches, debate and views to its own territory and history.

We believe that this 19th edition is particularly important. Due to the rise of the extreme right in Europe, we are faced with a serious threat. In reaction to this rise of anti-Semitism, the EDJC acts as a strong defender of diversity and coexistence. We see the promotion of Jewish cultural heritage, and as it being an integral part of European history, as a key factor in the prevention of anti-Semitic stereotypes and prejudices taking root and increasing resilience against intolerance.

19 years of commitment to the promotion of European Jewish cultural heritage.

This year, the EDJC celebrates its 19th edition. It has grown into a campaign that enhances the value of cultural heritage within the history of European territory, with a growing participation of local and regional agents, the organization of activities and participation of public during the month of September.

The EDJC is a continuation of the vision initiated in 1999 by the AEPJ (The European Association of the Preservation and Promotion of Jewish Culture and Heritage), a vision to actively involve “Heritage Communities” in the promotion of cultural heritage across the European continent. In line with the Council of Europe and the already mentioned Faro Convention of 2005, which advocates a new practice of shared heritage management, the focus of this initiative is not so much on the assets themselves, but the potential of heritage (material and immaterial) of society as a whole.

EDJC joins events to celebrate the European Year of Cultural Heritage, an initiative approved by the European Parliament, with the aim of promoting cultural heritage European Union, raise awareness about history and common values ​​by investing in heritage as an essential resource for our future, to be used for its educational and social value, and finally, for its considerable economic potential.

The European Days of the Jewish Culture: an initiative in constant growth.

Each year, a specific theme is chosen to link the different initiatives that take place throughout Europe, the theme for 2018 being Storytelling. Nowadays, Storytelling is a cutting-edge tool in the dissemination of historical heritage, turning this years edition into a great opportunity to explore different areas of tangible and intangible European Jewish heritage.

Oral tradition is undoubtedly a constant reference in history, tradition and the collective imagination of the Jewish people. From a biblical stories, folk tales of the rich local community, to the stories of contemporary migrations, Storytelling forms a written and unwritten world that not only asks, but deserves to be explored and discovered.

Today, more than one million Jews live in Europe. They are an integral part of multicultural Europe, active participants in almost all aspects of civic and public life in their countries. Jewish contributions to the arts and sciences continue unabated in Europe. However, the memory of the 20th century still persists, increasing the need for continuous tolerance and mutual understanding between Jewish communities and their neighbours.

Last year, more than 420 cities from 28 European countries joined the European Cultural Days Jewish, with the participation of more than 179,000 people. This program is coordinated by AEPJ, the European Association for the Preservation and Promotion of the Culture and the Jewish Heritage, with the collaboration of the National Library of Israel, and thanks to the initiatives and the ongoing work of municipalities, Jewish communities, museums and cultural centres throughout Europe. All information about the day can be found at the following link: 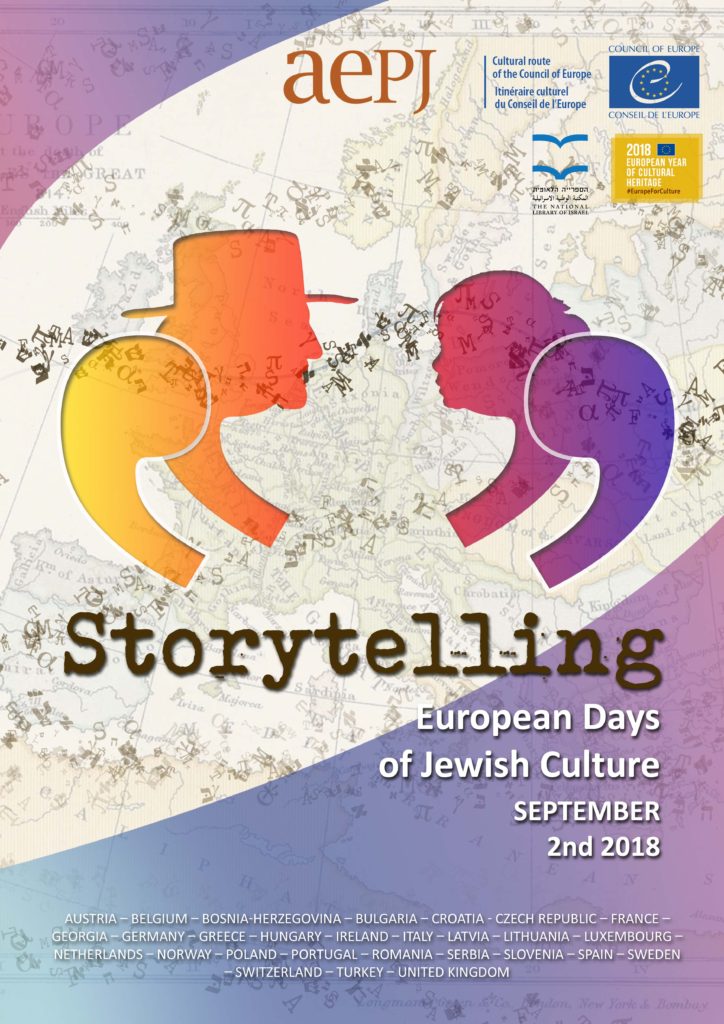