A version of this article was previously published in La Busca (2017; num. 88), the magazine of the Societat Catalana de Gnomònica, and in English in the Bulletin (2018; vol. 30(3)) of the British Sundial Society. All images are courtesy of Lupe Feria Seva.

In this article I should like to introduce you to an example of a sundial that denotes union for a
variety of reasons. It represents not only a personal friendship, but also a union of teamwork in
spite of cultural, political and religious differences between Arabs and Jews.

This all began thanks to a link through my friends, Noaa and Juanlu, in the small town of
Neot’Hakikar, in Israel. Through my friendship with the couple, I was able to visit Noaa’s
country. After a great night of celebration in the desert, surrounded by their relatives and
friends from around the world, and involving dinner and dancing under the local date
plantations, it was decided that we should continue by visiting the city of Jerusalem, the cradle
of cultures, on the following day.

What was it that caught my attention on arrival? It was neither the Wailing Wall, nor the
skyline of the old city of Jerusalem with the golden Dome of the Rock. No! Then what was it?
What could attract the attention of a fan of gnomonic projections? What I saw in the distance,
in the corner of my eye, was a small sculpture of extraordinary human ingenuity, the sundial of
Teddy Park (Fig. 1). 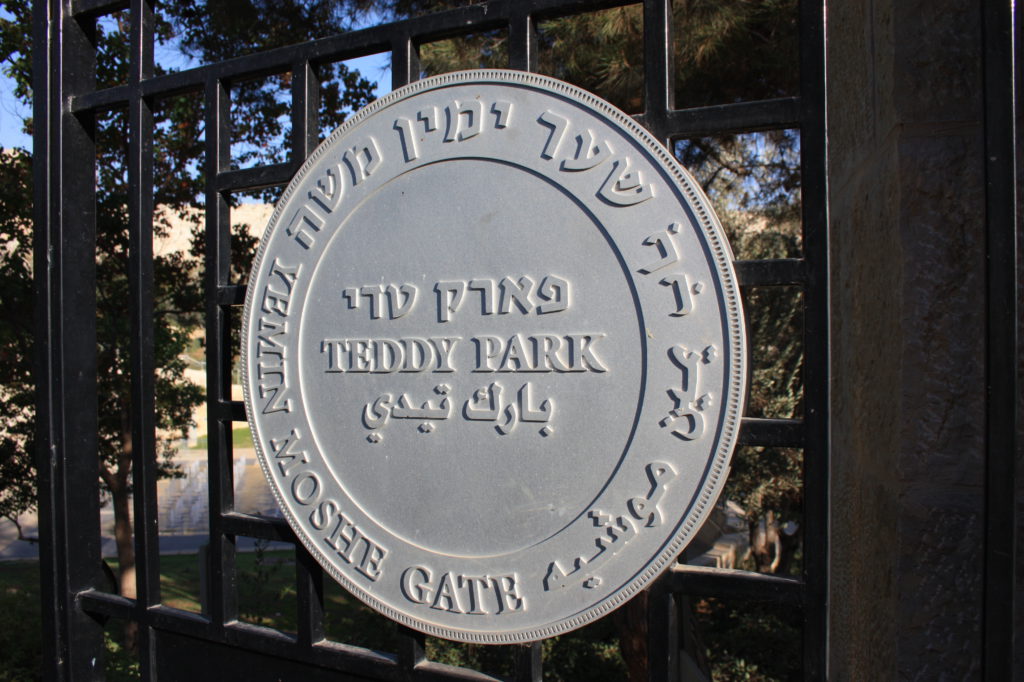 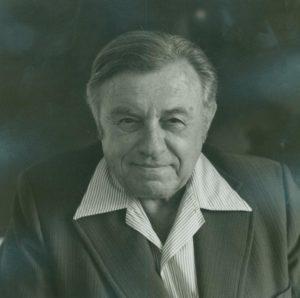 Many consider Kollek to be the man who transformed Jerusalem into a modern city following the reunification of 1967. He was a founder of the National Museum of Israel, the Municipal Theatre and the Jerusalem Foundation, and the financier of the construction of Teddy Park. In 1980, he was one of those opposed to the declaration of Jerusalem as the eternal and indivisible city of the state of Israel, owing to the risk it presented to the harmony and coexistence of the different religions in this historic city.

Teddy Park is situated in the centre of Jerusalem, but outside the Old City, just within the area of the Tower of David, Jaffa Gate, the old walls and Mamilla Mall. It is one of a series of parks and open areas: Mitchell Garden, Ha’atsmaut Park, Ha’emek Park, Teddy Park, The Sultan’s Pool, Gei Ben Hinom, Zurich Garden, Blumfield Garden, etc. (Figs. 3 and 4).

Fig. 3. Location of Teddy Park within the map of Jerusalem. 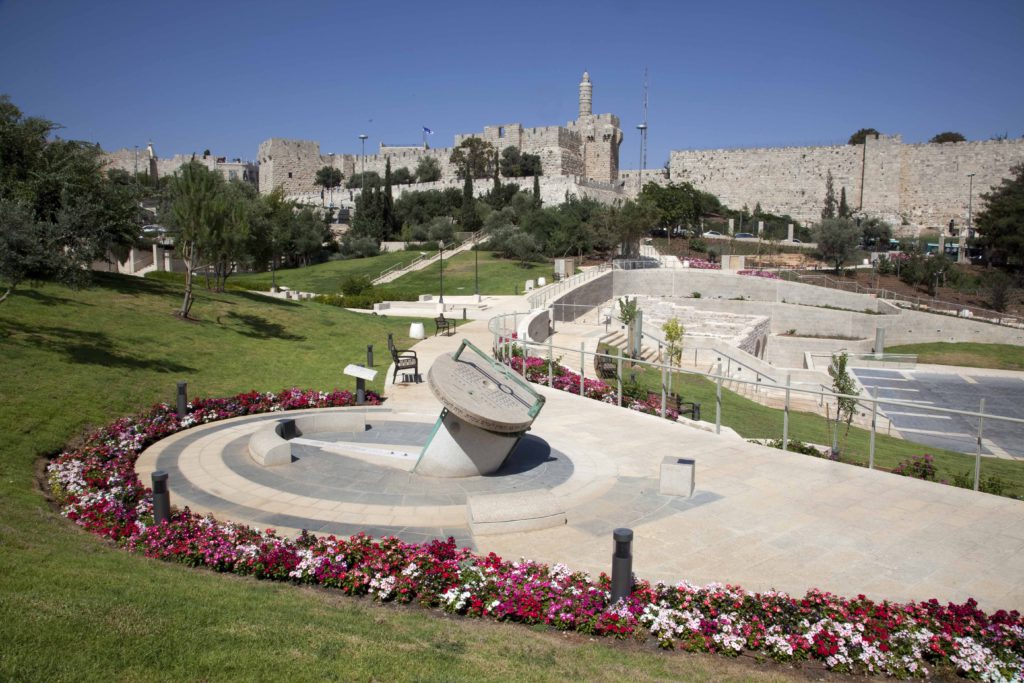 Fig. 4. The Teddy Park sundial with the Tower of David and the old walls in the background.

The Teddy Park sundial is at latitude 31° 46ʹ 32ʺ N, and longitude 35° 13ʹ 34ʺ E. Its typology is a polar plane with hour lines and half-hour lines, shown as dotted lines and continuous lines respectively, apart from the first and last hours, which do not have lines (Fig. 5). 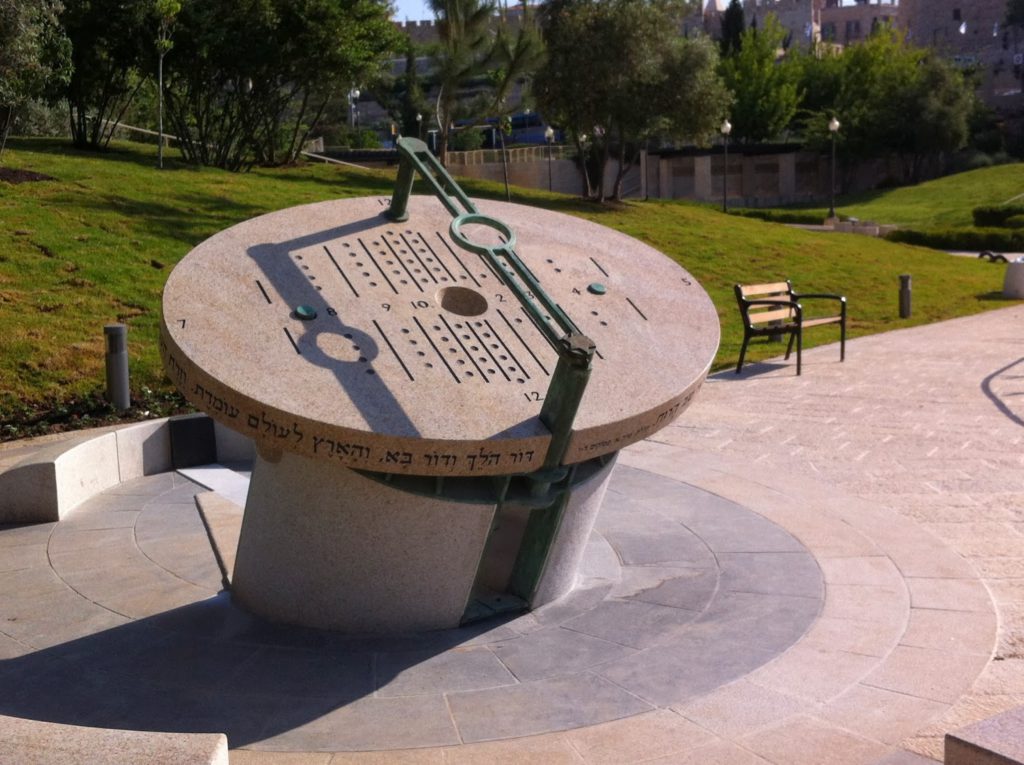 The stone dial plate is inclined at an angle equal to its geographical location, this being the main characteristic of all polar sundials.

It contains another element that makes it unique: the N–S axis of the dial plate has an aperture whose diameter exactly matches that of an open ring on the gnomon. At solar noon a spot of light falls on a meridian line underneath the dial plate.

Four points on the meridian line are labelled with five numbers in circles (Figs. 6.1 and 6.2): 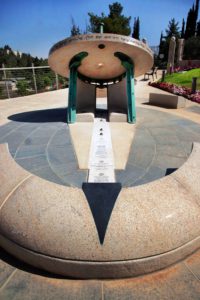 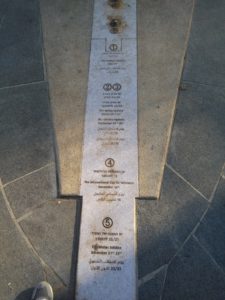 Information about the sundial and how it functions is provided on explanatory panels in three languages – Hebrew, English and Arabic – thus reaching a large number of people, and making the sundial accessible to the general public (Figs. 7.1 and 7.2). 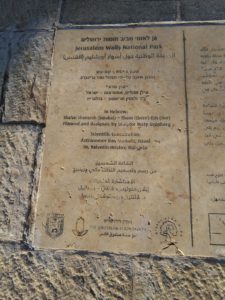 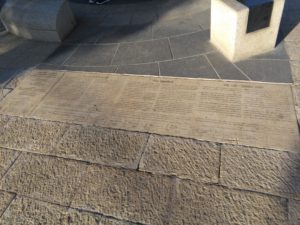 Despite its dimensions, 1.62 metres high, with a major axis of 2.25 metres, minor axis of 1.60 metres, and weight of 2.4 tonnes, the sculptor, Maty Grünberg, wanted to transmit to the spectator the sensation of buoyancy during the observation of this wonderful sundial, supporting it by only three points connected to the ground.

Inscribed on the edge of the sundial is Hebrew text (Fig. 8) that comes from the book of Ecclesiastes, also known as the Book of the Predicator, and one of 24 books that constitute the Hebrew Bible. The text consists of verses 4–6 of the first chapter, as follows: 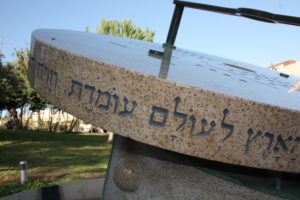 Fig. 8. Hebrew text on the edge of the sundial (detail).

The text consists of verses 4–6 of the first chapter, as follows:

This may be translated as:
“4 One generation passeth away, and another generation cometh: but the earth abideth for
ever.
“5 The sun also ariseth, and the sun goeth down, and hasteth to his place where he arose.
“6 The wind goeth toward the south, and turneth about unto the north; it whirleth about
continually, and the wind returneth again according to his circuits.”

Maty Grünberg is an Israeli artist who was born in Skopje, Macedonia (the former Yugoslavia) in 1943. Grünberg (Fig. 9) is one of a group of Yugoslavian Jews who emigrated to the new state of Israel in 1948. He studied at the Bezalel Academy of Arts and Design in Jerusalem and completed his studies with honours. For more than 40 years he lived and worked in London, where his interest in, and studies of, sundials were born. 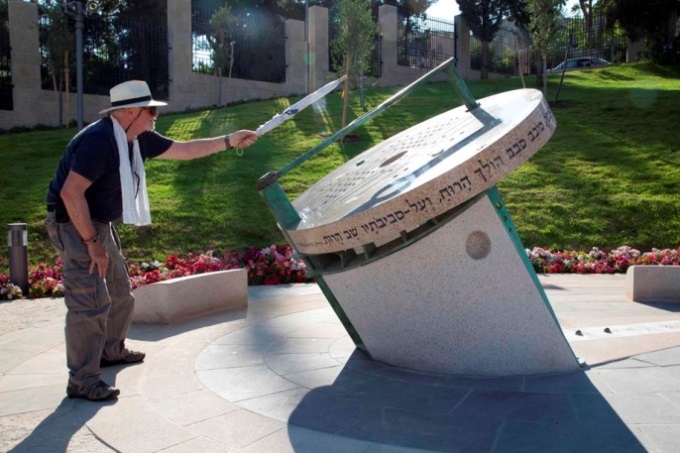 Fig. 9. Maty Grünberg and his sundial.

Grünberg explains that once in the neighbourhood of Greenwich the Meridian line divided his study. This division made him imagine that he could have one foot in the East and the other in the West of the planet. Here, his interest in time and sundials was born. Another curiosity that Grünberg comments on is that England has the largest collection of sundials despite the fact that the sun shines only 60 days per year on average.

The sundial in Teddy Park is not the only one designed by Grünberg. In 1999, he created a sundial in a private garden in Ascot, England, and, in 2000, another located in the entrance of the New York Hall of Science, the unique interactive centre of science and technology of New York City (Figs. 10 and 11 respectively). Both sundials are made of bronze and are of considerable dimensions.

Fig. 10. Sundial in a private garden in Ascot, England. 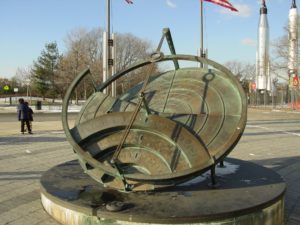 The initial plan for “Teddy Park’s Sundial” was to build it of bronze, but this was discarded because of the high cost and because of the amount of vandalism from which the city suffers. Grünberg considered Hevron, a popular stone in Jerusalem, but Yaakov Murdoch, owner of Jerusalem Gardens Stone Works Ltd, recommended granite, for its durability. In the end, black granite from Mongolia was used, carved in China and transported to Israel by ship.

The sundial in Teddy Park relied on collaboration with Ilan Manulis, a recognized Israeli astronomer, the director of the Weizmann Institute of Science’s Observatory in Rehovot, Israel. On the day that the last measurements were taken, Manulis was joking with Grünberg, that there was a possible deviation of 2 seconds in his calculations, resulting in 2 millimetres of deviation a year.

The cooperation in the construction of the sundial in Teddy Park is the aspect that makes this dial so special. In spite of cultural, political and religious differences, it represents the cooperation between Arabs and Jews.

The people involved in the project – Maty Grünberg, Illan Manulis, Yaakov Murdoch, Yitzhak Halfon (architect of Teddy Park) and Uri Shitrit (architect of Jerusalem) – as well as all the fans of the sundial, can be proud of this teamwork, and how two religions and two cultures are united by gnomonics.

Grünberg’s passion for sundials continues, and he is now working on a new sundial in Macedonia, his native land. His gnomonic works are deserving of another article.

For my part, I would like to add only that, while I do not know when I will return to Jerusalem, I am sure that I will see my new friend again, the sundial of the Teddy Park. 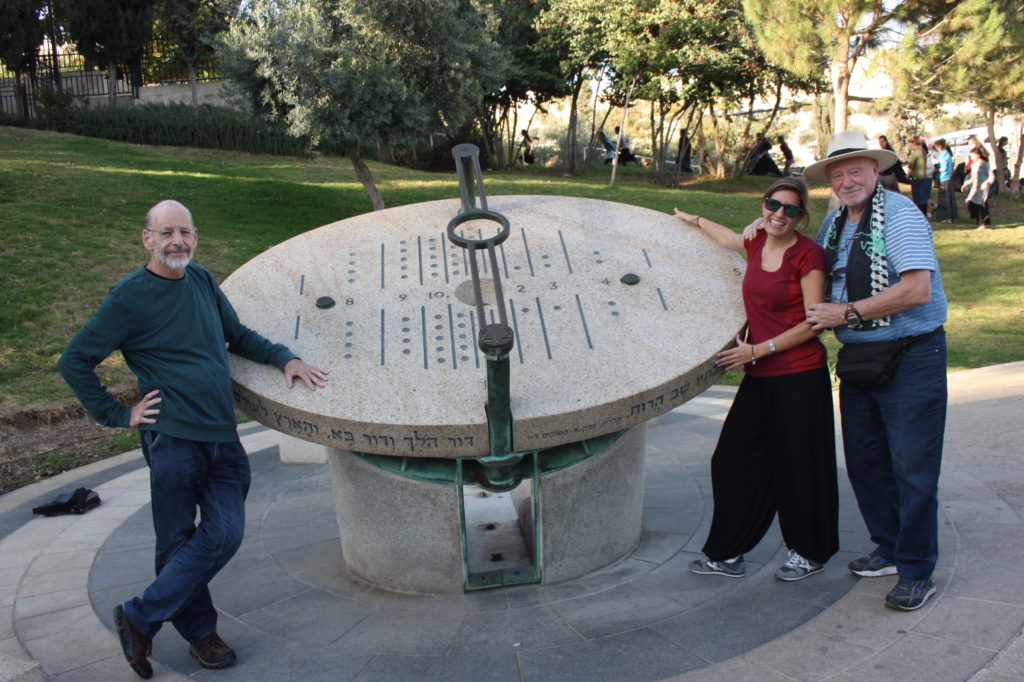 Lupe Feria Seva lives in Barcelona. She has a degree in textile engineering and a master in prevention of occupational hazards. She teaches technology. Since 2015, she has collaborated with the Societat Catalana de Gnòmica, leading workshops and guided tours and contributing articles. She considers gnomonics to be a science that combines various disciplines: mathematics, geometry, architecture, history, and art, among others. Currently, she is working on the protection study of the only sgrafitto sundial (18th cen.) in Nou Barris.