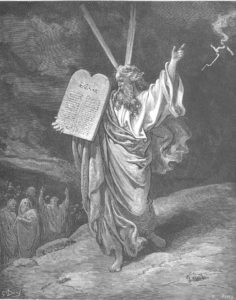 For Shavuot, we are proud to feature a poem by the American poet and translator Maia Evrona.

Seven weeks after Passover—
known as the end of the Omer—
one must pass the night studying Torah.

parted the waters and would be refugees
elsewhere again; For though we would wander
for forty years and another few thousand

in a dozen other eras to come, we became Jews
when the Almighty descended upon the mountain
and gave us five books to read on those journeys.

Maia Evrona is an American poet and translator of Yiddish and Spanish poetry. Her work has appeared in Prairie Schooner, Poetry Magazine and numerous other online and print venues. She has been awarded fellowships from the National Endowment for the Arts, the Yiddish Book Center and elsewhere. She recently spent several months as a poet-in-residence at Casa Adret with the support of a Fulbright award. “Shavuot (Shvues)” is an original poem.