I met Armin Langer last summer at a beach party. A very peculiar one, as there were no DJs, no tanned volleyball players, no cocktails with umbrellas, and no beach. It took place in the heart of Berlin, on the Pariser Platz, right in front of the Brandenburger Gate. There were Muslim women in hijabs giving speeches over a loudspeaker, girls in bikinis, people with beach toys and signs saying: “Stop colonizing female bodies,” and “Don’t call your racism feminism.” It was a “Beach Party against Racism,” a demonstration organized by the Salaam Schalom Initiative in response to the banning of burkinis on various beaches in France in the summer of 2016.  It was also a protest against the increasing scrutiny imposed on religious women’s clothes by European public opinion. The Salaam Schalom Initiative is a group that was established in 2013 in Berlin by Muslim and Jewish young adults and their allies to promote solidarity between minorities. 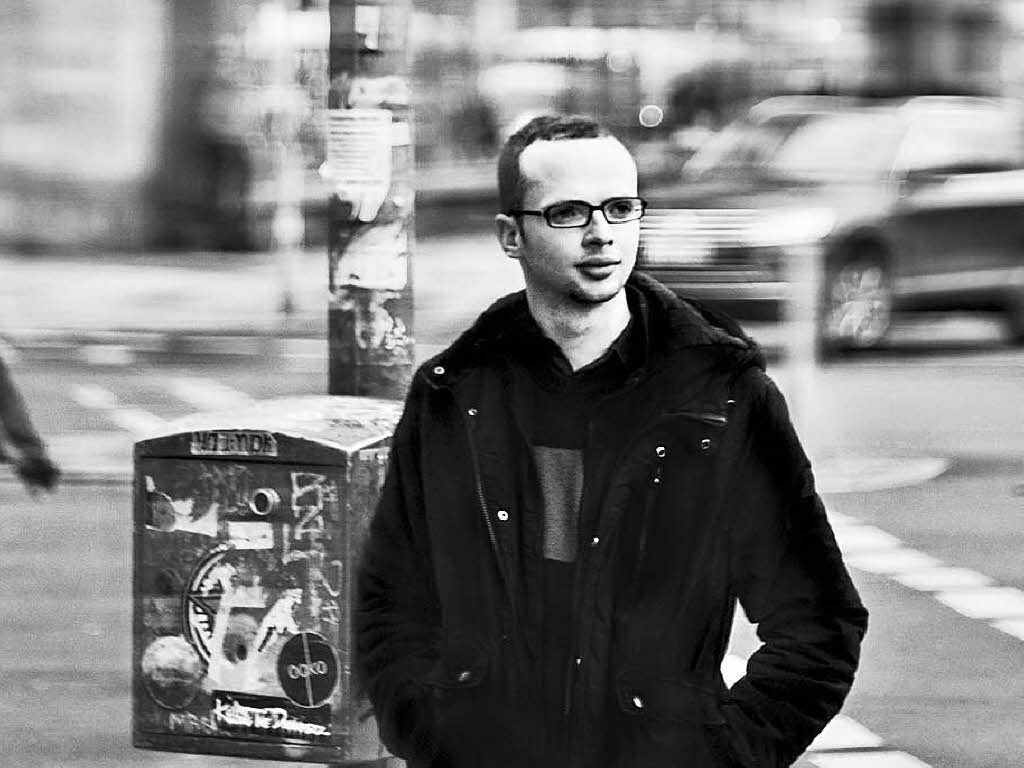 I learned about the group at Lange Nacht der Religionen (“The Long Night of Religions”) in Berlin in 2015.  I attended their workshop in the beautiful Sehitlik Mosque and learned about female hair covering in Islam and Judaism. Since then I started to follow the inspiring activities of the Salaam Schalom Initiative online, and soon realized it was almost impossible not to constantly come across information about Armin Langer, co-founder and coordinator of Salaam Schalom. A Hungarian Jew who lives in Neukölln, a multicultural neighbourhood in Berlin, where he moved in 2012 to attend a rabbinical seminary. He brought with him his relentless calling for social action. The “enfant terrible of the Jewish communities” is how the online magazine neukoellner.net described him for openly criticizing the Jewish establishment and denouncing social inequalities in Germany. After writing the controversial article Muslime sind die neuen Juden (“Muslims are the New Jews”), he was expelled from his rabbinical studies.

After our encounter at the “Beach Party,” I was waiting for my next trip to Berlin to get the chance to interview him, but I seized the day when he wrote saying he was coming to Barcelona. We spoke about his recently published autobiography Ein Jude in Neukölln (“A Jew in Neukölln”), the Salaam Schalom Initiative, Islamophobia and anti-Semitism while sipping coffee in Plaça de Joan Coromines in Raval.

V: The trigger for the foundation of the Salaam Schalom Initiative was a statement released by the anti-Semitism officer of the Jewish Community of Berlin, Daniel Alter, after he had been assaulted in 2012 by four “Arab-looking men”, right?

A: Right. Alter said in 2013 that Neukölln is a “no go” area for Jews because of the large amount of Muslims living in the neighbourhood. But the thing is that there are less anti-Semitic attacks committed in that neighbourhood than in other neighbourhoods of Berlin! Actually there is an orthodox synagogue in north Neukölln and there are thousands of young Israelis who moved to Berlin in the past five years and who speak Hebrew on the street, and the coexistence there is just fine.

V: So is Alter’s reaction pure panic-mongering? How safe are the Jews in Germany?

A: Well, it is not a black and white situation. One would think the Germans learnt the lesson of the Holocaust, and that anti-Semitism would have completely disappeared after the mass murder, but of course this didn’t happen. According to a study of the Bundestag (German constitutional and legislative body) of the year 2012, one fifth of the German population still believes in anti-Semitic clichés, that’s a lot of people! And each year 1,500 anti-Semitic incidences occur in Germany. But there is a crucial fact, and it’s exactly my point: 95 to 98% of all these attacks are committed by German right-wing extremists, and not by Muslims or migrants!

One of the main messages of the Salaam Schalom Initiative is that Anti-Semitism isn’t just prevalent among Muslim or immigrant communities, but anywhere in Germany society, and it must be addressed as a problem of the whole country.

V: Yes. Statements like Alter’s end up stigmatizing a specific group of people, in this case the Muslims, and we should be very careful with that.

A: Right, and I also find it problematic when a neighbourhood gets stigmatized as a Muslim or migrant neighbourhood, just because of its higher percentage of Muslim population. Anyways, it is a widespread theme among the representatives of the Jewish establishment that these places are “no go” for Jews.  Even the president of the Central Council of the Jews of Germany, the biggest Jewish organization in Germany, that represents almost half of the Jews of the country, said that Jews should avoid “migrant” neighbourhoo 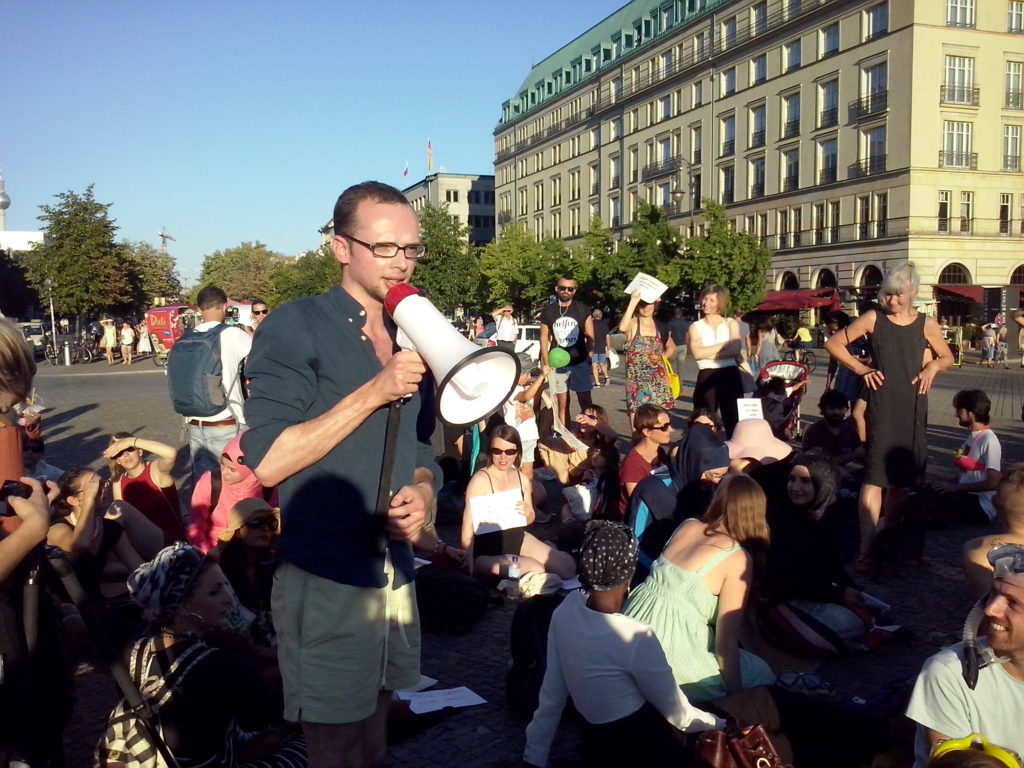 ds. He said this without even consulting with the Jews living in these allegedly “dangerous” areas. This attitude serves the far right, if you ask me, because it spreads the image of the Muslim as anti-Semitic, chauvinist, sexist and homophobic, basically a potential threat to democracy. Of course the integration of migrants represents a challenge for our society, but alarmism and stigmatization certainly don’t help solving it. I would actually say that they are on the contrary, absolutely counterproductive, especially for Jews, gays or women living in these “Muslim” neighbourhoods!

V: One of the main themes you talk about in your autobiography Ein Jude in Neukölln, is that the Jews are nowadays an integral part of the mainstream, and no longer the oppressed minority.  This position of yours didn’t really attract the sympathies of the German Jewish establishment and it eventually earned you the expulsion from your rabbinical seminary. Which nerve are you hitting there?

A: According to the right wing Zionist narrative a Jew cannot be part of the mainstream in Europe, because the only country where a Jew is supposed to be part of the majority is in Israel. Through my full integration in Germany and my engagement in social movements I am contradicting this narrative. Most of the Jewish established voices like the Central Council of the Jews in Germany echo the official narrative of the State of Israel.

I often have the feeling that even though they are physically in Germany, in their soul and minds they are actually in the state of Israel. And here lies in my opinion the big challenge for European Jews:  to realize that a fulfilling Jewish life is possible in Europe. Of course it’s not always easy; anti-Semitism hasn’t disappeared, as I have said before, but this doesn’t mean that Jewish life isn’t possible, and I stand for that pretty loud, that is what causes me so much trouble.

And just to put it straight, I have absolutely nothing against the state of Israel per se; I just want to disconnect my identity as a Jew from the State of Israel. When Netanyahu proclaimed himself prime minister of all the Jews on Earth in front of the Senate of the US I really felt like telling him: “Hey Bibi, I am sorry, but this is not the case! You are the prime minister of all Israeli Jews, and of all Israeli Palestinians, that’s it. I don’t have a prime minister, I have a chancellor, and her name is Angela Merkel!” 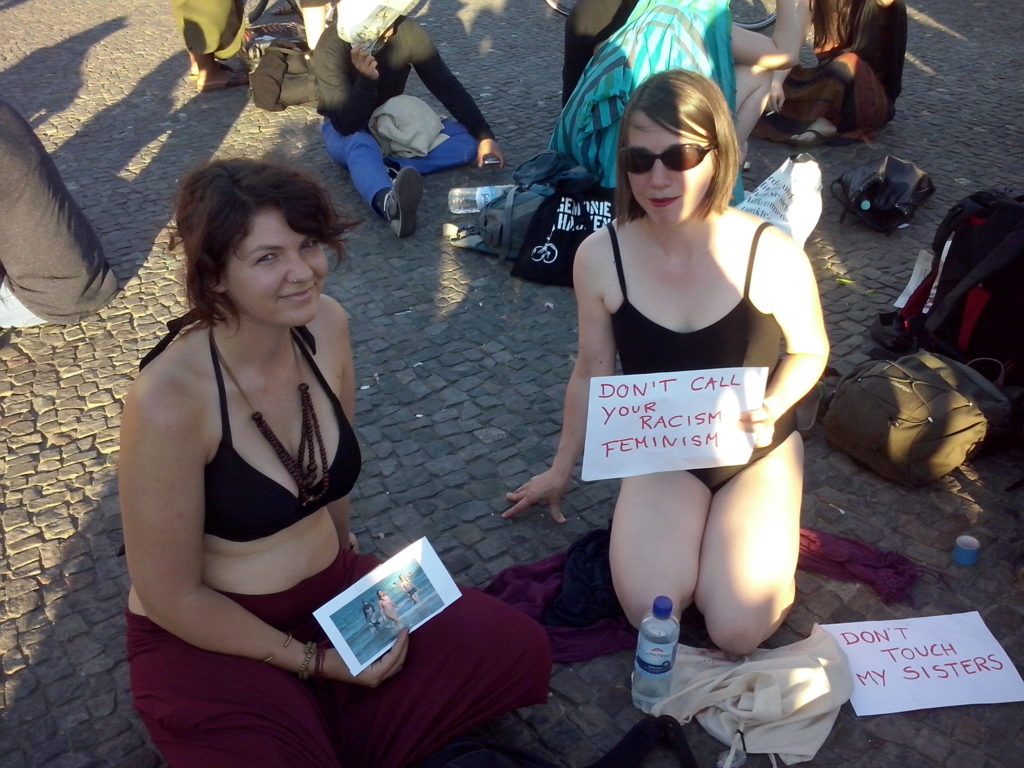 V: I would like to know more about the Judaism you promote in Europe.

A: It is a socially active Judaism, that reaches out to others, and which isn’t afraid to show itself. By the way, the best way for us Jews to fight anti-Semitism is actually to be open about our Judaism! I depict the traits of this modern, emancipated Judaism in details in my book, bringing a lot of passages from rabbinical and biblical sources.

Jews were oppressed throughout history in Europe; we had no civil rights, in the best cases we were tolerated. But this changed after the Holocaust and especially in the past few decades, and the fact that the far right is supporting a peaceful life for the Jews in Europe proves that they are officially part of the European mainstream. And it goes even further, the fight against anti-Semitism became a raison d’être in Germany, and this is good! Unfortunately it is the only kind of racism that the state officially fights. I wish there was the same commitment to fighting for the rights of other minorities as well; that the fight against Islamophobia would be considered as important as the fight against anti-Semitism, and that not only Jews were regarded as part of European body but also Muslims, and all the other religious groups. One of the main goals of our group is precisely to address this unequal situation.

V: That is a fundamental task, since equality is far from being achieved. I found it quite scary to discover in your book the way the current Islamophobic discourse in Germany reflects the anti-Semitic discourse of the 19th century. History is repeating itself blatantly, and we suffer from memory loss, as usual. What does the Salaam Schalom Initiative do to raise awareness about this issue?

A: Well, bringing up the parallelism you mentioned, and making people reflect on it is a big part of the mission. It is fundamental to show that the two discourses use exactly the same arguments; the only difference is that the word “Jew” has been replaced by the word “Muslim”. Many German intellectuals of the 19th century (Kant, Herder, Humboldt, etc.) thought that Judaism was a primitive religion, which is the same the AFD (Alternative for Germany) is now saying about Islam. If you take a look at their political agenda you will find that banning circumcision, ritual slaughters, burkas, etc. is high on their list. We do a lot of activities to raise awareness: we give talks, go to schools, organize discussions with scholars, policemen, journalists, and other professional groups. We also have a “Media Watch,” meaning that we always keep an eye on what the media publish, and if we find an article to be biased, we publicly put things straight. For example, some time ago I wrote an article for Die Zeit in which I denounced the unequal representation of Jews and Muslims in the mainstream narrative. I did it in response to an episode in which I was involved with a Muslim friend of mine: we were interviewed together, and in the publication he was merely described as “Armin Langer’s friend.” In general, we address these issues all the time and we never stop talking about it, in any context, as we use all possible means to spread the word. 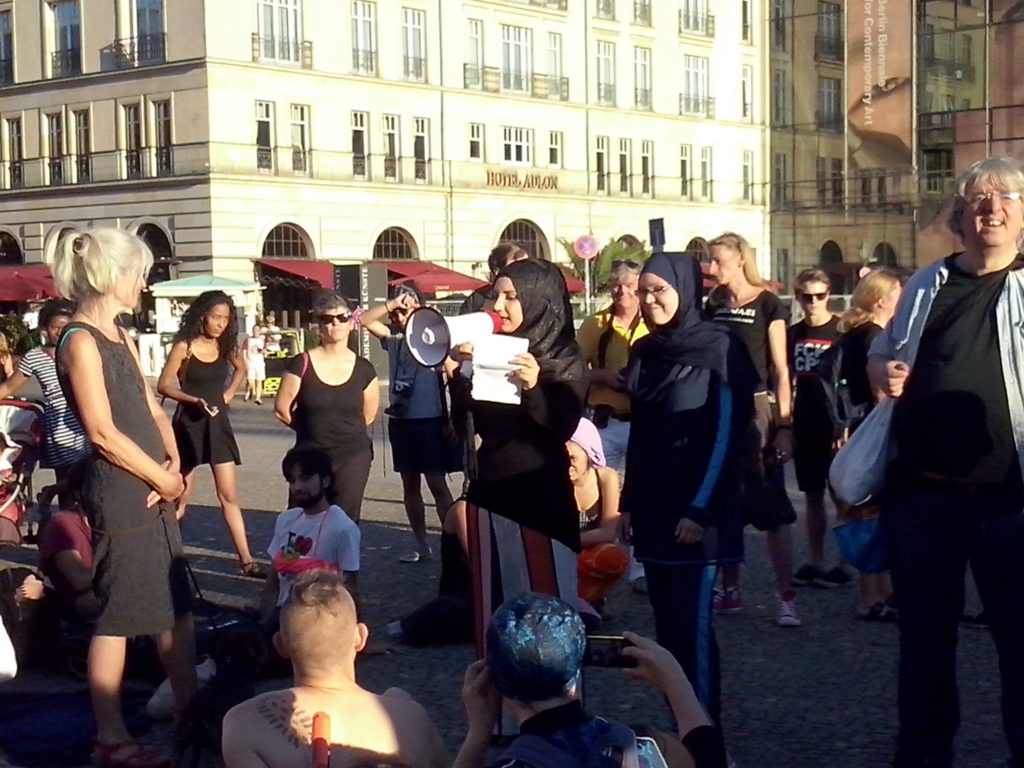 V: The slogan of the Salaam Schalom Initiative “we refuse to be enemies” is your answer to a certain discourse, which is doing everything possible to divide minorities’ interests…

A: Yes, our cohesion irritates the far right, which is trying make the Jews and the LGBT community their allies against Muslims. We think that we have to support each other as minorities, because if there is something that history has taught us it’s that today it might be somebody else who is being oppressed, discriminated against, victimized, but tomorrow it could be you. We have also many non-Jewish and non-Muslim members in our group of course, their support is important. Our message has inspired many people in the past couple of years, now we even have chapters in Copenhagen, Hamburg and Budapest, and hopefully soon there will be more Salaam Schalom Initiatives in other European cities.

One thought on “Armin Langer: A Jew in Neukölln”