One of the more transparent and pathetic strategies of damage control that has emerged in the wake of the Black Notebooks’ publication is the contention that, given the proportions and extent of the current historical crisis, we need Heidegger more than ever. Often, this gambit is accompanied by nebulous claims concerning the Holocaust that are leveraged as part of a (pro-Heideggerian) strategy of moral intimidation. Ultimately, once the fog has cleared, we are presumptively informed that we need Heidegger – someone who was both a true believer and an active participant in a regime that was responsible for Auschwitz and kindred mass atrocities – in order to “think the Holocaust.” It was the late Pierre Bourdieu who, with admirable concision, delivered the coup de grace to all such crass apologetics, declaring: “When I hear people say that Heidegger alone makes it possible for us to think the Holocaust – but perhaps I am insufficiently postmodern – I think I must be dreaming!”[i].

Bourdieu’s caveats notwithstanding, this is precisely the interpretive tack pursued by Donatella di Cesare, both in Heidegger, die Juden, und die Shoah (Frankfurt: Klostermann Verlag, 2015 / Heidegger y los judíos. Barcelona: Gedisa, 2017) and in as well as in her recent essay on “Das Sein und der Jude”[ii]. Thus as di Cesare proclaims, with exculpatory intent: “[Heidegger’s] philosophical error was his compromise with metaphysics, which is what forced him seek a definition of Judaism instead of viewing this ‘Other’ as a transition ‘beyond’ [definition]”[iii]. 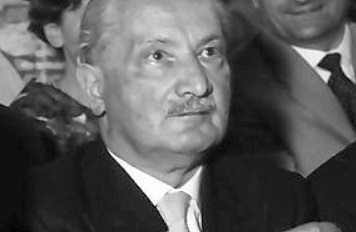 Di Cesare’s conclusions are unsustainable and misleading on a number of counts.

For one, Heidegger’s views concerning the viability of “metaphysics” fluctuated over time. Thus, at times, he was quite favorably disposed toward the paradigm of metaphysics. Otherwise he would not have written texts that bore titles such as “What is Metaphysics?” (1929) and Introduction to Metaphysics (1935). Thus as late as 1940, Heidegger crudely praised Germany’s blitzkrieg victory over France as a “metaphysical act.” Moreover, Heidegger’s later doctrine of the history of Being never dispensed with the eminently metaphysical notion of “essence” (Wesen).

All of these instances demonstrate that, di Cesare’s caveats and pleas notwithstanding, when it served his purposes, Heidegger continued to invoke metaphysics in a highly positive sense.

Furthermore, di Cesare’s contention that Heidegger’s anti-Semitism was in some mysterious fashion metaphysically conditioned is erroneous. Such claims seem to derive from a strategic maneuver that seeks to immunize the later, purportedly “post-metaphysical” Heidegger from criticism.

However, a more philologically reliable account of Heidegger’s anti-Semitism would show that it was natural outgrowth of his philosophical attachment to the ethos of Germanocentrism: the view that Heidegger expresses repeatedly in his late work that Deutschtum (Germanness) alone is capable of redeeming the West from its fate of rash and interminable “decline.” Hence, as a corollary to Heidegger’s advocacy of German particularism and völkisch thought, his anti-Semitism had virtually nothing to do with “metaphysics.” Instead, it would be more accurate to say that Heidegger’s anti-Semitism derived from his having rejected the standpoint of the “Universal,” which, historically, has been a natural ally or accompaniment of metaphysical thinking. [iv] In the end, had he remained faithful to “metaphysics,” his open embrace of German chauvinism would have been much more difficult.

Foreseeably, once di Cesare has gone through the motions of criticizing Heidegger – for the most part, a side-show: an exercise in Kabuki philosophy – she can return to endorsing his philosophical standpoint in good conscience and with redoubled vigor. Consequently, once we have left the question of Heidegger’s Nazism permanently behind us, it is one again safe to pose the Seinsfrage or question of Being. Hence, di Cesare’s conclusion that, given the perils and catastrophes of twentieth-century history, today, we need Heidegger more than ever. Thus in “Heidegger’s Metaphysical Anti-Semitism,” di Cesare perversely seeks to elevate a thinker who, in The Black Notebooks, characterized the Holocaust as an act of “Jewish self-annihilation” (jüdische Selbstvernichtung) to the status of the “philosopher of the Shoah.” As di Cesare informs us: “After The Black Notebooks, Auschwitz appears more closely connected with [the Heideggerian trope of] the Oblivion of Being . . . [Heidegger] has provided those concepts that today allow a reflection on the Shoah: from enframing, Gestell, to technology, from the banality of evil to the ‘fabrication of corpses’”[v].

Such claims openly flirt with Holocaust denial. After all, when it came to Nazism, Heidegger was by no means merely an ordinary follower or compagnon de route. Instead, he was “plus Catholique que le roi” – the “roi” in question being Hitler. “It would be worthwhile to enquire,” opines Heidegger in his 1939 seminar, Die Geschichte des Seyns, “about the Jews’ predisposition to planetary criminality”[vi]. And in another choice passage (this one taken from The Black Notebooks), Heidegger declares: “The question of world Jewry’s role is not a racial question but a metaphysical one – a question about what sort of human being can undertake the deracination of Being by beings as a ‘world-historical’ task”[vii].

In the foregoing citation, Heidegger employs “metaphysical” in a positive or approbatory sense in order to indicate that his condemnatory judgment about “world Jewry” accords with the innermost tendencies of his philosophy. The reason that, following the war, Heidegger never renounced his earlier commitment to National Socialism is that he continued to adhere to what, in Introduction to Metaphysics, he termed the “inner truth and greatness of National Socialism”[viii]. Given all that we now know about the extent and profundity of Heidegger’s anti-Semitism – a prejudice that is integrally related to his delusional commitment to Deutschtum or what he at times refers to as “Germanic Dasein” – to celebrate Heidegger as the “philosopher of the Shoah,” as does di Cesare in Heidegger, Les Juifs, et le Shoah, presents itself as an ultimate act of cynicism: in Sartrian terms, it stand as the ne plus ultra of mauvaise foi. 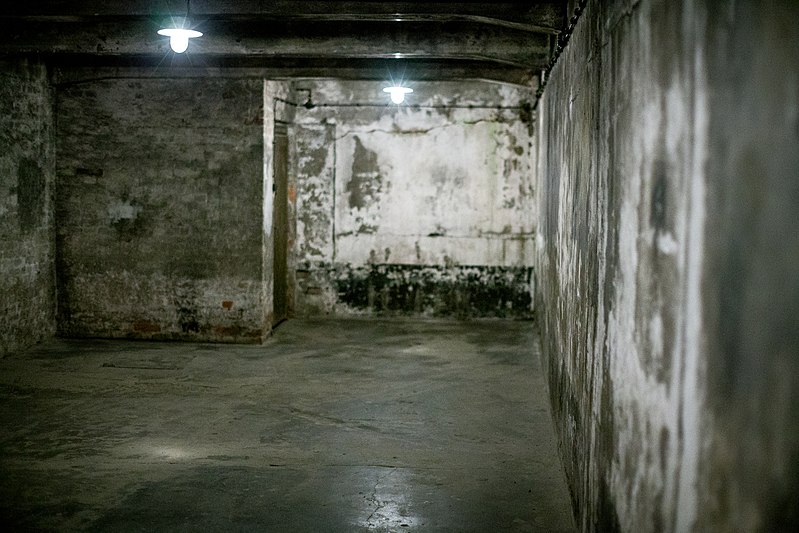 A gas chamber in Auschwitz. Photo by L-BBE licensed under Creative Commons 3.0.

This point has been made quite forcefully in a highly critical review of the French edition of di Cesare’s book by the Le Monde journalist, Nicolas Weill. In addition, Weill helps readers to understand that di Cesare’s attempt in Heidegger, les Juifs et la Shoah to situate Heidegger’s anti-Semitism within an extensive lineage of German philosophical anti-Semitism falls short of the exculpatory conclusions that di Cesare seeks to advance:

In sum: if di Cesare truly cared about the historical causes of the Shoah, she would realize that, when all is said and done, Heidegger’s embrace of Seinsvergessenheit (oblivion of Being) constitutes a pseudo-explanation. It is an account that is designed to mystify and confuse an immanent historical process that urgently calls for clarification and decipherment. In point of fact, as an explanatory rubric, the “Oblivion of Being” possesses very little elucidatory power. It is a classic example of what the philosopher Jürgen Habermas, with reference to Heidegger, has termed “abstraction via essentialization”[ix]. When all is said and done, Heidegger employed it in order to absolve his fellow Germans of responsibility for their ghastly deeds. Hence, it functioned as little more than a convenient way of avoiding what Karl Jaspers termed Die Schuldfrage, or The Question of German Guilt.

The moral ambiguities entailed by di Cesare’s proposition that we rely on a philosopher who, as The Black Notebooks reveal, was a staunch anti-Semite as well as a convinced Nazi to explicate the Shoah are considerable. In addition, it demonstrates extremely poor judgment on her part. It shows that, in the end, di Cesare cares infinitely more about whitewashing Heidegger, and, thereby, protecting the “cultural capital” (Bourdieu) she has accumulated as a Heidegger scholar, than she does about actually shedding light on the nature of the Shoah. It is difficult to avoid the conclusion that, in point of fact, di Cesare’s excessive reliance on the notion of he “Oblivion of Being” goes hand in hand with the “oblivion” of reason and common sense.

In Heidegger’s eyes, the Jews represented a formidable threat to the German Volk’s realization of its destiny. The German Volk found itself stifled in its mission, which was to prepare the terrain for a return of the gods. For Heidegger, to link the Germans to this ‘Other Beginning’ clearly signified a way of preventing the triumph of Machenschaft. The hermeneutical violence enacted by Heidegger’s philosophy runs deep . . . insofar as it leads to the argument that the Jews programmed their own destruction. Heidegger does little more than reprise the arguments of theorists of anti-Semitism who affirm that the Jew is an essentially destructive being[x].

As Cohen-Levinas shows, already during the 1920s, Heidegger’s indebtedness to the German Sonderweg perspective is readily discernible: in his recourse to ideological positions that stand midway between the “Ideas of 1914”, as a figure for the Sturm und Kampf mentalité of the so-called “war youth generation,” and those of his May 1933 Rektoratsrede.

In this respect, it is worth recalling, that in Sein und Zeit, paragraph 74, Heidegger invokes, seriatim, the concepts of Gemeinschaft, Generation, Volk, Heldentum, and Kampf:

If fateful Dasein, as Being-in-the-world, exists essentially in Being-with-Others, its historizing is co-historizing and is determinative for it as destiny [Geschick]. This is how we designate the historizing of the community [Gemeinschaft], of a Volk . . . Only in communicating and in struggle [Kampf] does the power of destiny become free. Dasein’s fateful destiny in and with its ‘generation’ goes to make up the full authentic historizing Dasein . . . The authentic repetition of a possibility of existence that has been – the possibility that Dasein may choose its hero – is grounded existentially in anticipatory resoluteness [Entchlossenheit]; for it is in resoluteness that one first chooses the choice that makes one free for the struggle [Kampf] of loyally following in the footsteps of that which can be repeated[xi].

What are the ideas of Volk, Kampf, Gemeinschaft, and Heldentum doing at the heart of a treatise on “fundamental ontology”? They demonstrate that, even at this relatively early point, Heidegger’s conception of Being-in-the-world was profoundly beholden to the worldview of the so-called Grabenschützgemeinschaft – the “community of the trenches” – of 1914-18. The deeper one probes the roots of Heidegger’s thought, the clearer it becomes that these generational experiences became the touchstone of Eigentlichkeit (authenticity). In other words: in determining the existential constituents of authentic Being-in-the-world, the war youth generation served as Heidegger’s central point of reference.

On this basis, it seems safe to conclude that Heidegger’s anti-Judaism, which is already prominent in letters dating from the 1910s[xii], has infinitely more to do with his longstanding attachments to Lebensphilosophie and the ideology of the German particularism than, as some of his more credulous supporters claim, with the idiom Western metaphysics.

In the end, it strains credulity to propose that a thinker as calculating and sophisticated as Heidegger would have transgressed his innermost philosophical convictions (viz., the “critique of metaphysics”) in such a careless and transparent manner. By seeking to excuse what is inexcusable, di Cesare’s brazen exonerations of the Master merely redouble Heidegger’s own inexcusable ideological errors and his missteps. At this point, we have departed from the terrain of rigorous theoretical argument in favor of wholesale and disingenuous apologetics.

[i] Bourdieu, “Back to History,” The Heidegger Controversy, 266.