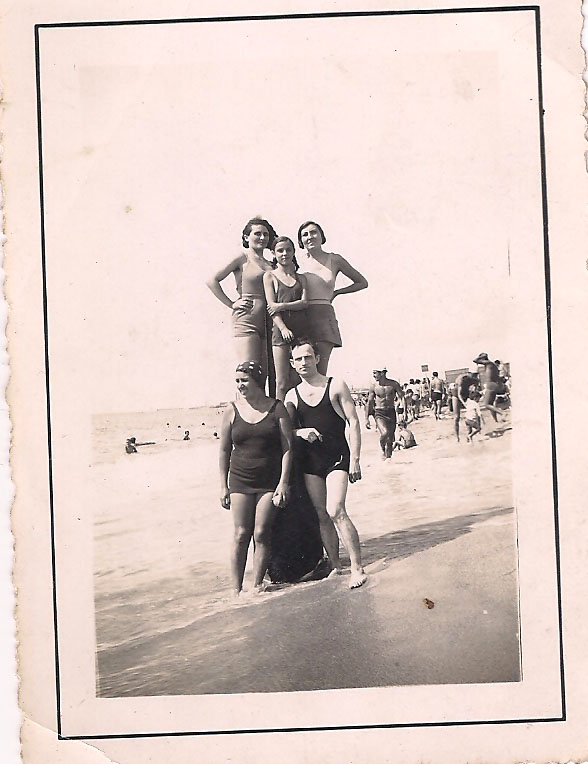 The tour tries to rescue the history of the first years of the CIB, Comunidad Israelita de Barcelona, from its foundation, at the end of 1918, until the inauguration of the new headquarters at 44 Avenir Street, in the year 1954.

The itinerary will follow the footsteps of several protagonists. Edmundo Metzger, a Swiss immigrant living in Barcelona since the beginning of the twentieth century, proclaimed first president; Samson Sobol, Russian translator and bookseller from Magilov, one of the seventeen founders; the Salpati family, Turkish immigrants from the south of France; Enrique Talarewitz, turkish immigrant, first secretary; Joseph Barchilon a Jew from Tánger, another of the founders; Manuel Mendelsohn, polish immigrant; Steinlauf family. immigrants from Chelmiec, Poland; Edmundo Grünebaum, president of the CIB during the Civil War who got retaliation; Ronya Abraham, Jewish refugee from Letonia; Dora Poch, young Pollish refugee; Samuel Maytek, polish industrial, and part of the administration of the CIB during the forties, etc. The visitor will live in his own skin the beginnings os the first Jewish community established in Spain after the expulsión in 1492 having as scenery the convulsive Barcelona from the the first half of the twentieth cenury.

During World War I, around one and two thousand Turkish Jews arrive to Spain coming fron western Europe, the majoerity of them were residents of France. A great percentage will return to their homeland after the war. A few of them will stay. In May the 6th 1919, nearly two months after the Treaty of Versailles was signed, the new statutes for the Comunidad Israelita de Barcelona will be approved. Seventeen pioneers fron diferent parts of the world will be the founders. Barchilon y Benssusan had arrived from Tánger, Matalón, Harari, Beresi, Eskenazi, Haim and Matarasso had come from the Ottoman Empire, Samson Sobol was from Maguilov, Russia, the Metzger brothers, Edmund and Joseph as well as Sigmund Kirschen came from Central Europe. Based on The Law of Association, they signed the regulations, establishing as president Edmund Metzger, secretary Enrique Talarevits. And as head of religious matters, Alberto Alazraki. They rent a place to be used as synagogue in a chalet at 250 Provenza Street. During the first years they occupied only the lower floors and a part of the garden. This would be the first location for the Comunidad Israelita de Barcelona after the expulsión in 1492.

Once WWI was over, Jews from the eastern Mediterranean kept coming to Barcelona because of the economic crisis and the proliferation of nationalisms. The Jewish comunnity of Barcelona kept on growing. The next wave of Jewish immigrants will come from Russia, they were escaping from the bolchevique revolution. In 1925 there is an estimate that the Jewish population in the city was one thousand people, this number will double itself three years after.

The coming of nazism in Germany, during March 1933, will displace to the Spanish State and more specifically to Barcelona, a numerous contingent of Ashkenazi Jews. Writers, journalists, cesnsored artists, retailers, lawyers, medical doctors, political disidents, (parados), men and women from all ages, specially young people, with different motivations and conditions, that were only trying to remake their lives on a Spanish Republic that seemed as the ideal place to start from zero.

In spite of what might seem, they did not have an easy time. At the end of April, Salvador de Madariaga,the Spanish Ambassador in France, was sending a telegram to the Spanish destined in the cities bordering Germany recommending that “In order to avoid the referred Jews that are with no means of work to go to Spain, it is convinient that you tell them about the difficulties they will find in order to exercise their professions in our country.”

The strong will of the refugees and the permissiveness from the government of the Generalitat towards the newly arrived reduced the obstacles that they found in their way, making it possible to have people entering little by little. The city that had put up with solvency the effects of the 29 crisis, offered various possibilities, making the consolidation of the Jewish refugees easier.

When the Civil War started, during July 1936, there was a migratroy flow made up of Jews from one side and the other of the Pyrenees. On the one hand we confirm the departure of refugees abroad, we are talking about people that had been succesfully established in the city of Barcelona – in very good positions- that would flee in fear of outrage and revolutionary fervor. On the other hand, we find an inverse wave, the arrival of a great number of Jewish volunteers, antifascists, that would enroll into the republican cause, many of them would end up taking part at the end of 1937 of a unity of their own under the name of Naftali Bowin.

The entrance of Franco´s troops to Barcelona the 26th of January, 1936 marked the end of war in the city and gave rise to a new scenario in which the values of the franquist regime would impose themselves with blood and fire. The synagogue and the community center on the Provenza Street are sacked . The president of the community Edmundo Graembaum, is arrested and made prisoner because he had a high rank as a Mason. Just half a year after, Germany would make the offensive over Poland, and in that way the Second World War would start. Franco, facing a devastated nation as a result of the fratricide conflict, chooses to declare neutrality. Nevertheless, what might seem to international eyes as a non-belligerent posture, in Spanish territoy the opposite occurs The regime shows freely an attitude in favor of the Axis powers, making their espionage and logistics tasks easier ( at least until 1942). From then on the city of Barcelona receives a constant and slow entrance of refugees that are escaping from nazism and who illegally go through the borders between France and Spain by the Pyrenees ( this flow will continue all through the war). The city that embraces them is gray and a plotter dominated by uncertainty.

The refugees wait with anxiety their visas that never arrive while the streets are full of spies and police from the Gestapo. On May 13, 1942, each and everyone of the civil Spanish governors receive notice from the Dirección General de Seguridad. In it they are ordered to send individual information about “the israelites, national and foreigners living in that province (…) indicating their personal and socio political filiation, way of life, comercial acitivities, current situation, degree of danger, pólice conceptutation”.
During this time the increase that experiments the Jewish community of Barcelona is ficticious, as the people are just passing by, they are waiting for papers that will get to friendlier territories, America and Palestine mostly.

In April 1939, a commission made up by Jacque Danon, vice-president. Marcel Calef, secretary, and Samuel Maytek, responsible for the Hebrá Kadishá appears before the civil government asking to see the Governor, González Oliveras, in order to obtain permission to reopen the aynagogue and community center. González Oiveras does not receive them and during that very month he officially closes the building in Provenza Street. The documents are confiscated and sent to the Archive in Salamanca.

A very dark and dangerous time for the Jews living in the city begins. In the area belonging to security, the government will adopt police measures of control creating a department of Judaism called the Judaic Archive which will be run by José Finat and Escrivá Romani. On the sidelines of this organigram the Special Brigade was also created commanded by the furious antisemite, Mauricio Carlavilla. His most important mission was to control the Jews living in Spain, attending, in that way, to the special and expressly request made by Himmler, chief of the SS and of the sevices of security of the Third Reich, who had an interview with Finat in Berlin. The creation of the Judaic Archive was the reult of a memo from the Dirección General de Seguridad issued on the 5th of May 1941in which José Finat ordered all civil governors to send individual reports about the “Israelites, national snd foreigners living in that province” in a predetermined format indicating “personal and socio-political filiation, means of life, comercial activities, current situation, degree of danger, pólice conceptualization”. As well as other complementary information.

When the WWII ends and after six years of franquism, the regime promulgates el Fuero de los Españoles, which regulates the status and functioning of the religious non catholic institutions. The Jews will not be bothered but they will have to practice their cult in privacy. This will be the time when Fortunato Buenarroch, president in charge, will seek help form the International Jewish Congress to reopen the synagogue, The intervention from Isaac Weissamn who was delegate for the council for Spain and Portugal will be decisive to solve the case. On January 15, 1946, Mr. Benarroch recieves the oficial letter from the Dirección General de Seguridad in which que is authorized to open the synagogue. On the month of April they will recieve permission to sacrifice cattle in the slaughterhouse.

On November 27, 1947, CIB is mad up by 128 heads of the family from very different origins (34 Sapnish, 25 turkish, 22polish, 10 Greek, 7 German and others like italian, french, hungarian, portuguese, etc), On April 1949 with the intention of reducing expenses and looking for a place to build the future headquarters, CIB goes, in a temporal way, to an aparment on 153 Avenida Roma. Finally, after two years, on September 1954, in Rosh Hashaná the current building is inaugurated , the first temple built in Spanish soil after the expulsion in 1492.

4 thoughts on “100 years of the Comunidad Israelita de Barcelona (Jewish Community of Barcelona).”