Abraham A. Cappon was my great-grandfather.  He was born in Roustchuk (now Ruse), Bulgaria in 1853 and died in Sarajevo (Yugoslavia) in 1930. He was a journalist, writer, poet, teacher and haham (Torah scholar). He was very active in the religious, cultural and educational activities of the Jewish communities in the cities where he lived: Roustchuk, Nicopolis, Plovdiv, and Vama (all in Bulgaria), Ploiesti (Romania), and finally Sarajevo.

The poem «A España», written between 1900 and 1911, was read on October 18, 1990 in the city of Oviedo, Spain by Rabbi Salomon Gaon at the ceremony that marked the formal reconciliation of the Spanish government with Sephardic communities worldwide on the occasion of the 500-year anniversary of the expulsion of Jews from Spain. On this occasion, the Príncipe de Asturias de la Concordia award was given to «the Sephardic communities scattered throughout the world, part of the large Hispanic family which left the Iberian peninsula for five hundred years with the keys of their homes in their hands.»

This ceremony was marked by great emotion, particularly during Rabbi Gaon’s speech, which took place in Ladino, the language spoken by the descendants of those who were expelled from Spain.

This touching speech was a posthumous tribute to the man and the work of Abraham Cappon. As Haham Gaon said,

It was a pity that Nissim Cappon, the last living son of Abraham Cappon and the guardian of the last documents of the family, could not participate in the ceremony to experience the tribute to his late father’s memory and work. At the time, Nissim Cappon was already 103 years old and his health did not allow him to travel to Spain from Geneva, where he lived.

Abraham Cappon was born in Roustchuk (today Ruse), a beautiful city on the banks of the Danube across from Romania. The houses by the river are still large, with leafy trees recalling the community’s peak in Bulgaria during the 19th century.

He was the grandson of Rabbi Schlomo Cappon, who was born in 1753 in Vidin, another famous Jewish community in Bulgaria. Rabbi Schlomo Cappon lived many years in Ruse, where he married Clara Rosanes, daughter of an important local family, in 1794.  One of the descendants of Clara Rosanes’s brother was Avraham ben Israel Rosanes, «Abbir», Ruse’s famous rabbi, who reformed the city’s educational system in 1850. Abbir’s son, Salomon Rosanes (1862-1938) was an important historian, and wrote, among others, The History of the Jews of Bulgaria and The History of the Israeli Community of Ruse. (It is unclear if Abraham and Salomon knew each other, or knew about their family relationship.)

Nono Avram, as he was affectionately and respectfully called by the community’s children, began his religious studies in the only Jewish school in Ruse, founded circa 1850 by the famous Rabbi Avraham ben Israel Rosanes. Due to the early death of his father, he reluctantly had to abandon his studies to work in commerce and several other activities in order to help support his family. This experience had such an influence on him that, in his later years when he was able to, he dedicated himself to his passion: the pursuit of knowledge, the study of letters, and other intellectual activities. 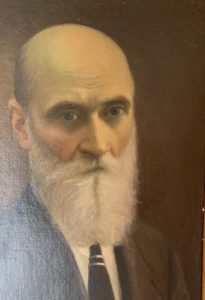 At that time, there were not many possibilities for good secular education. The wealthy families could send their children abroad to study, but for the vast majority, the opportunities for a high-quality education were very small. The religious education basically came from the family, and from the small and rare meldars (in Ladino, a place to read, i.e., a place where children were educated) established and maintained by the local Jewish community.

I presume that for Abraham, having had his formal studies truncated by the material needs of his family, as well as by the limited availability of educational opportunities, was a major motivator to find ways to increase and, most importantly, disseminate cultural knowledge via his newspaper and writings.

Consistent with his intellectual pursuits, Abraham became a translator, journalist, poet, playwright, Hebrew teacher, and even a hazzan, thanks to his religious knowledge. He made up his intellectual debt to himself and proved his personal drive with an intense participation in the cultural and educational activities of the Jewish communities in the cities where he lived.

He always struggled for the harmonization between the realities of the modern world and a society that reflected inherited religious and Turkish cultural customs. He participated and collaborated with the efforts and activities of the Alliance Israelite, a French charitable society that aimed to bring the possibilities of secular and religious studies for young people to Jewish communities.

In 1885, when Abraham was 32, he crossed the Danube and went to live in Ploiesti, Romania. There he had a very active life in the community. Together with a group of intellectuals, he created the statutes of the city’s charitable community, «Bihur Holim Rehitsa Levaya». In addition, he helped build a new synagogue for the city, and founded his newspaper La Alborada in 1898. The newspaper was written in Ladino, but in Rashi letters, as was the custom at the time.

In that newspaper, in addition to the local news and articles of interest for the Jewish community, he published translations and commentary on local and foreign literature, including Talmudic works. The newspaper’s entire content was published in a language that was easy for its readers to understand: Ladino.

At the end of the 19th century, antisemitic sentiment began to grow in Romania, Abraham thought it would be convenient for the future of his large family – he had 8 children – to leave Romania and go to the United States, at the suggestion of friends who lived there. Indeed, one of his sons from his first marriage, Aaron («Buko»), had already emigrated to the United States. However, for a number of reasons, his emigration to the United States was unsuccessful, and he decided to take his family to Sarajevo.

Jewish cultural life in Sarajevo in 1900 was very poor. Jewish youth were emigrating to study in Austria, leaving the old generation to maintain Jewish culture and customs in the city. Thus, Abraham thought that there were possibilities to develop his work and have a successful life.With promises of financial support from various sources, he again started to printLa Alborada,the first edition of which was published on December 28, 1900. However, the financial backing for the newspaper that was promised to him did not materialize, and after eight months, he had to close the newspaper. In order to support his family, he became a hazzan and Hebrew instructor for the Jewish community of Sarajevo.

In line with his modern attitudes for the time, he introduced for the first time in the history of Sarajevo a choir for the religious services at his synagogue. There is an anecdote told by my mother, Abraham Cappon’s granddaughter,  that he insisted on silence during the religious rites so that the choir could be heard.  As a result, the synagogue was known as «Il Kal de los Mudos»: the synagogue of the mute.

His progressive attitudes, combined with his strong personality, generated certain resistance from the conservative forces in the community. Some of the orthodox Jews at times even threw stones at him because during Shabbat he used a cane for walking to the synagogue. Despite this, he enjoyed popularity and respect from younger community members. Over time, nonetheless, his modern ideas increasingly clashed with conservative community voices, so that in 1910 he was stripped of his position as hazzan.

With his children grown and free from his responsibilities as hazzan, Abraham Cappon dedicated himself to teaching Hebrew to young people, and writing for various Jewish publications and libraries (including the main Bulgarian-Jewish weekly Hashofar, as well as writing his own poems, plays, etc.

The expression españoles sin patria («Spaniards without a country») is originally from one of Ángel Pulido’s works (Españoles sin patria y la raza sefardí,) published in 1905. Ángel Pulido was a Spanish politician and writer, also author of Los israelitas españoles y el idioma castellano,  among other works. During the first years of the 20th century, Pulido began a large campaign intended to make known to the Spanish public that there was a Spanish-Jewish community who lived outside Spain but that maintained various Spanish customs and spoke Spanish. Ángel Pulido was a contemporary and a friend of my great-grandfather. This is evidenced by the correspondence between them as well as with another illustrious Spaniard, Ramón Menéndez Pidal, between 1911 and 1923.

For years, Abraham Cappon looked for ways to publicize his booksworks, poems, and plays, all in Spanish, without much success. He sought help from his contacts with Messrs. Pulido, Menéndez Pidal, and Coronel Manrique de Lara to publish his work in Spain, so as to demonstrate the link that existed between the country and the Sephardis who lived in Bulgaria, Turkey, Yugoslavia, Romania, and elsewhere. His great desire was

to attract the attention of cultural societies and charities regarding the importance of these poems, which could be of great benefit to the development of talents and intellectual faculties of the younger generations. Each one of my poems has  moral content and can add to other elements in their entertainment programs, etc.

Unfortunately, he was unable to obtain the means to publish and distribute his work. He eventually decided to publish some of his poems in his newspaper La Alborada. In 1922, through his sons, Santo and Yehiel, he published in Sarajevo a book containing all the poetry he had written, to prevent it from being lost. I don’t know if there are other copies of this book, or how or where it was distributed, but there is still a copy left in the family.

The last years of his life were dedicated to what had always been his deepest desire: to write, teach, and transmit Jewish and Sephardi culture to those who did not have the opportunity to know it in all its extent and richness. He passed away on September 21, 1930 in Sarajevo.

Morris Kalef is Abraham Cappon’s great-grandson on his maternal side. He currently lives in Barcelona, having achieved his ancestors’ dream of returning to their beloved Spain, and is collaborating with Vicenç Villatoro on a book about his family history and the Sephardi experience.

Un pensamiento en “Abraham Cappon, a Spaniard without a country”